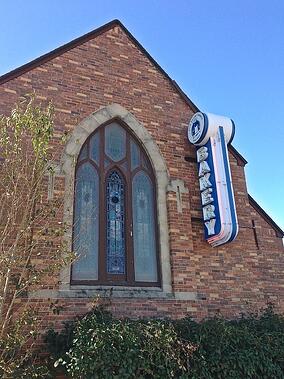 Save the churches! No, this isn’t a blog about threats to religion or a particular denomination; it’s about the buildings we use for worship. Many churches, temples, and religious buildings are at risk. I blogged last year about the growing threat to historic worship spaces. As congregation members are aging and as populations are moving, many old churches are suffering from neglect and are threatened with demolition or abandonment. In the past, a new congregation could readily move in when another moved out. But that doesn’t necessarily happen as before. Today, accommodating a new use may be a church’s only hope for salvation. But designing an adaptive reuse for a church is extremely difficult.

By chance, I recently discovered one example of a church successfully adapted to a new use in mid-town Fort Worth. The Bluebonnet Bakery happily inhabits an old historic church and has become a special landmark for an appreciative community.

We were driving from downtown along Camp Bowie Road when we noticed something unusual projecting from what looked like a normal church building. It was a vertical neon sign, more typical of a restaurant or bar than a church. We slowed down enough to notice that the sign was for a bakery, so clearly this religious structure had undergone a major conversion.

The design made smart use of the existing building footprint. The nave became the new dining area with the iconic round tables and metal chairs for seating. A row of booths, formed with old pews, was a fun reminder of the original building. Along the other side, bright cases displayed enticing offerings. The old chancel, or altar area, became a special seating place, set aside for small meetings or groups. The original stained glass window remains in place, an overtly religious symbol, but one that feels appropriate in the space. The baking area, offices, bathrooms and storage fill the old church offices and classrooms off to the side, behind the counter. 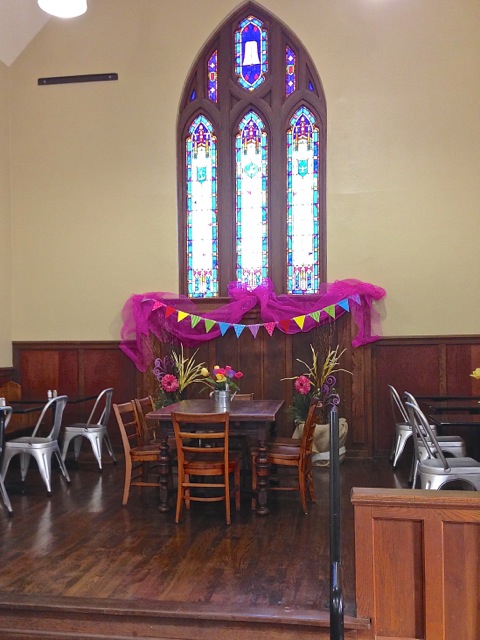 I asked one of the staff if anyone from the old church had come in to see the bakery. “Yes, and they love it!” She recounted a recent visit from an elderly couple. They sat in the raised seating area and told everyone that this is the place where they were married. “They were so happy we’d save the old building.”

Fortuitous timing appears to have given this church its new life. When it was listed for sale, neighbors raised the alarm. Frontage on a prominent commercial street made this location a prime spot for a restaurant or retail center. People assumed that a new use would mean a new building. The closed church would certainly be demolished.

Several blocks away, the Bluebonnet Bakery, coincidently was looking for a new place to expand. So it made sense for the owners to look into the old church for a new loca 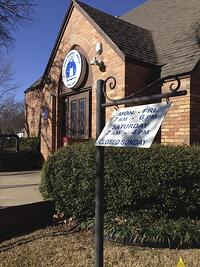 tion. They bought the church and implemented a very sensitive renovation. They not only met their needs for more room, but also created a truly unique landmark for the business.

Both inside and out, the look of the old church has been preserved. However, one very important change contributes architecturally to the success. I noticed the ceremonial entry appears to have been modified. A new entry vestibule leads from the parking lot behind the church building. A side door also opens on to the street. A welcome gesture to sidewalk traffic, but scaled-down entry compared to the typical ceremonial church entrance.

The effect of both these doors is to create a neighborhood character for the entrances. If someone had any lingering concerns about going into a church by mistake, the doors, and the brightly painted signage are reassuring invitations to come in and enjoy the transformation. And, of course, get some very good coffee and some sweet pastries as well.

Need more information about older structures?
Here's our suggestions for owners and supporters of historic buildings.