Adaptive Reuse: From Church to Cabaret in Canada 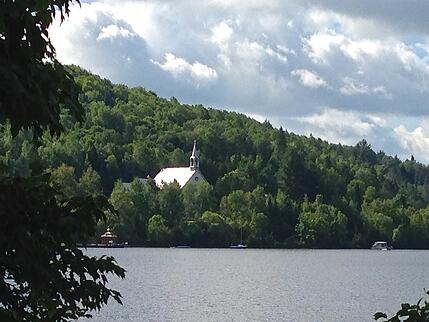 When several communities north of Montreal were merged in 2005, an unused church building, formerly known as Sacré-Coeur-de-Jésus (Sacred Heart of Jesus) became the property of the new township. A straightforward adaptive reuse program kept the exterior of the old church, while on the inside, the old Sacred Heart was transformed into a musical theater venue.

The new village of Mont Tremblant renamed the landmark “Première Scène à l’église du Village,” which roughly translates to “First Stage at the Village Church.”   The name rather clearly describes the municipality’s approach to the adaptive reuse program. It is obvious that their intention was to keep an identifiable landmark, so the image of the village church remains unchanged. Once the exterior was preserved, they gutted the interior. The inside renovations included a new stage, theater lighting, heavy curtains over the windows, and casual cabaret seating.

From the outside, the landmark still looks like a place of worship. The classic façade and bell tower rise out of the trees above the lake. Approa

ching the building from the parking below, a broad staircase invites visitors up to the expanded landing, an outdoor plaza that takes full advantage of the lake views.

The outdoor plaza is fairly large. It is propped up with large wooden supports that project out from a supporting stone wall. One suspects that it wasn’t built for the original church. Even though church gatherings or special ceremonies would have benefitted from such a large entry space, it isn’t hard to see that the structure, the railings and the walking surface are all new. Perhaps the stone wall is original. If so, then the stairs would likely have connected to a much narrower gathering space for the old church.

Except for the overall shape, there’s almost nothing on the interior to indicate the original church use. The foyer is pretty narrow, probably a holdover from the church, hence the need for the exterior gathering plaza. The rest of the interior renovation, however, seems to have produced a fine performance space. Exposed wood finishes may have been added, or perhaps are refinished boards from the old church interior. The interior offers a wide audience area with flexible chairs, stools, and tables. The effect creates a warm and welcoming environment for many kinds of performances. 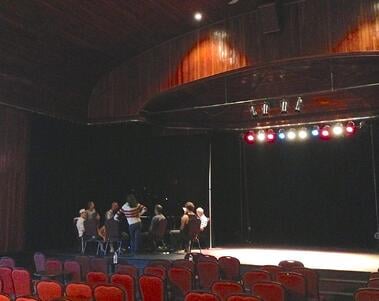 When I stopped in for a visit, a vocal group was practicing by the piano. The acoustics were well tuned for their voices. Visibility in the main seating area and in the balcony was excellent. Though I wasn’t able to stay for the performance, I was impressed with the space. It certainly is well suited for its new use.

I was saddened, though, to see so much of the old church history lost with the new interior. But I really can’t fault this approach to saving the old structure. The program went to great lengths to make sure the original church exterior was fully restored and preserved. Even the exterior sign for the new theater was designed to look like it belonged to the church. The community got a very useful, and apparently well-used theater space, and they kept intact the distinctive image of the historic building.

Use this link to see some of my other posts concerning the adaptive reuse of churches and other buildings.

Need more information about older structures?
Here's our suggestions for owners and supporters of historic buildings.