What draws American architects to Europe, generation after generation?

This question came to mind as we were leaving Madrid for Chicago, a long flight home after travel in Spain and Portugal. Maryann and I celebrated our 57th wedding anniversary with a tour around the coast of Spain and France.  We’ve been able to see much of Europe over many trips, but this was our first visit to Granada, Seville, Lisbon, Santiago de Compostela, Bilbao, Madrid and Toledo.

We’ve loved our past visits to Spain.  Our most recent trip introduced us to Barcelona. However, decades earlier, we spent a year in Rome on a Fulbright Scholarship, so we know much more about Italy.  We’d been looking forward to this tour, a boat trip around the Spanish coast, as a chance to expand our understanding of the culture, and of course, the architecture. 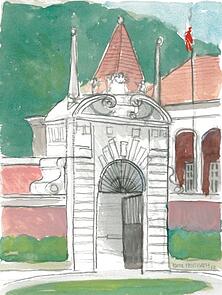 In the 19th century the Grand Tour was essential education for American architects. For several generations, the study European architecture brought first-hand knowledge of great architectural monuments – inspirations for the classical designs eagerly desired by American patrons and practitioners.  This era gave way to the modern movement. And while there are a number of modernist icons worth a visit, the typical itinerary for American architects continues to favor the old grand monuments.  Why then do architects keep going back when supposedly the design world has moved on?

One answer may be in the relative young age of our monumental buildings.  The incredible Toledo Cathedral, the third largest religious structure after St Peters in Rome and Westminster Abbey in London, was completed in 1492. The Toledo Cathedral took 300 years to complete - the aspiration of generations of sponsors, architects, stone-masons and craftsmen.

For an architect, the skill and commitment required to produce such a structure is overpowering to consider. Each stone was quarried, moved, hoisted in

place with technologies in practice before Columbus even left Spain for the New World.

In the hours I spent painting a watercolor of the Toledo Cathedral, I noted the distinct features the evidenced various periods of design. For example the tower began with a square footprint reflecting Moorish architecture of the time.  The top was added later - with Gothic and Baroque ornamentation.
This is fascinating for an architect.

Studying historic structures is recognizing the scale and proportion of each element, working together to create a whole.  In doing the watercolor of the Cathedral I noted that the two arched openings at the top of the rectangular tower are reflected by three rows of pilasters cascading down the tower above a solid base. And the various periods are reflected at the entry. The Gothic portico is superimposed in front of an earlier higher volume behind.

Our plane home was halfway across the Atlantic when more of the pull of Europe came to mind.  I have always been interested in curvilinear forms. Looking around on the 747 and it is an interior filled with curved wonder. I made a connection; the freedom to work with non-linear shapes isn’t entirely new.  Days earlier, I had just finished watercolors of two curvilinear buildings in Europe

In Madrid we discovered San Miguel, a Counter Reformation Jesuit church with its curved façade, as if the church were bursting out onto the street.  This design uses one-dimensional curves, that is the curves are generated by a single axis.

The other curvilinear building was a new one, Frank Gerry’s Guggenheim Museum in Bilbao.  I painted a scene from above.  The Guggenheim is curvilinear but designed using double curvatures, that is, curves generated by multiple axes. In the U S I could see Frank Gerry buildings but could not compare them with facades designed in a different age and aesthetic. 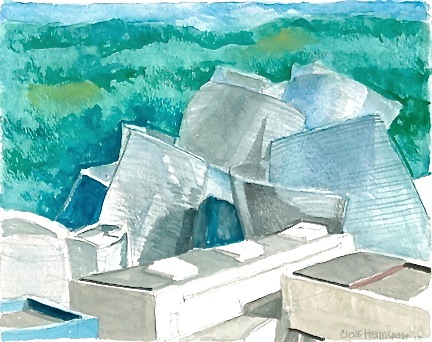 As we landed in Chicago, I relished the thought that I was back in only one day, not the weeks of sailing it took 19th century architects to cross the Atlantic.  I was home full of creative ideas, happy to share some of my watercolors with the next generation interested in architecture.