The national journal, Faith & Form, published Ben Heimsath's article "A Shared Process of Creation."  He wrote about the architectural design process as a collaborative venture.  A design created in a truly shared process has the potential to express a unique sense of spirituality.  The journal does not post on-line, so the editor has given us permission to copy the published article for download.

A shortened version of the article is reformatted for the current blogpost.

A SHARED PROCESS OF CREATION

Can we determine whether a new or renovated environment built for prayer is going to convey a sense of spirituality?  I believe we can if a congregation has a highly engaged process whereby this fundamental goal is shared equally by the architects and the community.  In more than 30 years of work with faith groups, our firm has developed a process for design and project implementation based on our belief that groups can find spirituality as they share in the creative design process. 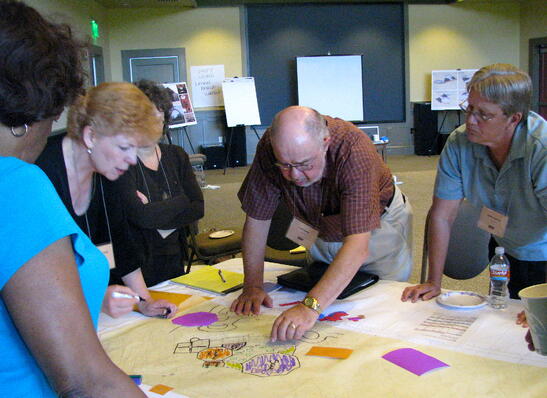 This highly interactive process includes the collaborative session that we call a Design Retreat Workshop.  We utilize many established community design principles whereby people are actively engaged in the design process.  Held in a neutral setting, the Design Retreat Workshop includes components of both a leadership forum and a problem-solving charette. However, unlike these traditional formats, the event is compressed into one day, and the architects and congregation leaders participate equally in generating design ideas.  The goal for the session is simple: everyone present must feel that the group, in the end, has developed one solution that is the "best." A major advantage of this early engagement of the congregation leaders is that the creative interaction continues throughout the rest of the building process. Many significant contributions come from ideas generated or refined from the Design Retreat Workshop.

Journalist James Surowiecki wrote "The Wisdom of Crowds" to explore the extensive economic and sociological research documenting numerous ways that groups of people, large and small, outperform even the most talented individuals in predicting and problem solving.  Surowiecki however, offers little insight into the reason this happens. When individuals gather together and find a connection or common purpose, the experience can become so tangible that it may be felt or expressed as an actual presence in the group. In the course of many of our Design Retreat Workshops, this energy has been called many things; the “Holy Spirit,” “God’s Presence,” or a similar expression appropriate to the various religious traditions that have participated. These creative design experiences seem to embody the genius of communal worship. Each experience is remarkably similar, regardless of what it is called.


Unity Church of the Hills

A case study of the Unity Church of the Hills in Austin, Texas, illustrates the process with the creation of a successful spirit-filled environment. This project involved the relocation of the church to a new, undeveloped site. The process for Unity's design and implementation typifies our approach to working with congregations and provides an opportunity for commentary.

In 1999 two-dozen congregation leaders assembled at a local restaurant reserved for the Design Retreat Workshop. Structured discussions focused on what made the two-and-a-half-year-old ministry special. Participants assessed information from a previous small group tour of the existing facilities that helped to generate priorities for the new 14-acre site. The morning exchanges helped to identity the spirit that members felt within the congregation. While many groups describe this spirit through stories of their history, the Unity Church group stressed the connections members already had made with the undeveloped property. One participant shared his revelation when he saw the seller's name, Guthrie O'Donnell, abbreviated as "G O'D" on the subdivision documents. Nearly everyone described a feeling of peacefulness under the canopy of trees even though buildings surrounded the property on all sides.

In the afternoon session, the architects explained that the group should consider itself the authors of the final design. The architects noted that they would be refining the concept, but the basic plan would emerge from this retreat. The Unity participants were separated into brainstorming groups and asked to work with one of the architects to imagine as many solutions as possible. As the brainstorming wrapped up, 11 sketches adorned the walls.

Two preferred plans located buildings in the same clearing near the center of the site. They both featured circular plans for the 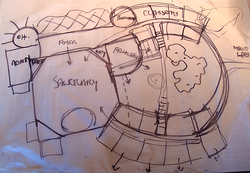 sanctuary. The architects explained that the circle is associated with sacred geometries, and that Renaissance builders saw the circle as a perfect form. The ministers noted that the circle is a powerful symbol in the Unity theology. One plan showed a large entry arch over the narrow drive connecting to the main commercial street. The other featured a masonry wall that parted to emphasize the transition from the parking area to the interior of the site.

The architects suggested ways to merge the two solutions. The entry arch and the parted stone wall could both be used to create a path symbolic of the spiritual journey towards worship. The building placement and the circular sanctuary shown on both plans could become an octagonal plan. 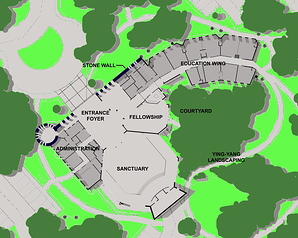 The session ended with an affirmation by each participant that the group had developed an inspired design for the property. The ministers, in their closing prayer, cited Unity teaching in describing the powerful goodness of God that had been present in the day's proceedings. The plan sketch from the Design Retreat Workshop closely resembles the completed building, featuring an octagonal sanctuary that stands on the site today.

The collaborative process continued to produce fruitful results. Only four trees were removed to accommodate the parking, drives, and building. The entry arch concept violated numerous codes, but variances were approved unanimously by city agencies.

Most architects are not trained to share the design process with groups. They often see creativity as an individual effort that is only compromised by outside participation. This approach can cause strained relationships particularly when the client is a church or spiritual community. This unwillingness to share seems particularly incongruous, considering how many architects equate the creative spark with divinity, even suggesting the process of design creativity as a metaphor for understanding God.

Theologically, most contemporary denominations don't believe their buildings contain God. Rather, they share some form of the belief that God is present when "two or more are gathered in God's name." As the Unity process illustrates, something special also happens when people gather to design in God's name. The sense of spirituality so greatly appreciated by the congregation today has its roots in the spirituality experienced by its members as they engaged in the process of creating it.

Read the entire article as published in Faith & Form - download it now.