How did an unrealized design concept for an urban cathedral eventually give rise to a desert chapel?  Some architectural ideas take a long time to develop, but this one really took some interesting twists and turns. This fall, I visited the Never Built:  Los Angeles show at the A+D Architecture & Design museum in Los Angeles.  I was surprised to discover an early, though vastly different, antecedent to the Chapel of the Holy Cross.  This intimate chapel is a major icon of modernist architecture and spiritual design, but evidence suggests it started with an idea for a soaring skyscraper.  It took several decades, but this architectural idea eventually did get built, and in a very different form.  The tower was planned for Los Angeles, but the idea eventually came to fruition in the deserts of Arizona!

According to a wonderful piece on the Gateway to Sedona website, the story began in 1930 when, in New York City, a young heiress saw one of the newly built skyscrapers and envisioned the façade with a soaring cross superimposed upon it.  Marguerite Staude was a devout Catholic raised in California.  She commissioned Lloyd Wright, the son of Frank Lloyd Wright, to realize her vision with a design for a new Cathedral Tower in Los Angeles. 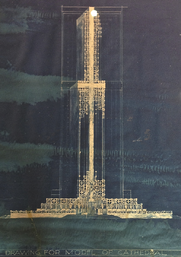 Evocative sketches for the 50-story tower were on display at the A+D exhibit, along with a much less expressive model constructed from lego blocks.  The architect’s roughed-out drawings show a Greek-cross plan of a 4-sided tower.    Each of the identical facades is formed to feature the massive cross that runs the entire height of the building.   Though a site was never selected for the project, the gargantuan size of these crosses would have been hard to miss.  For comparison, Houston’s celebrated Transco Tower (now the Williams Tower) is 64 stories.  One of Philip Johnson’s late career designs, its iconic image can be seen for miles.

The exhibit notes offers a short explanation that the Archbishop of the LA Diocese rejected the offer and the project was abandoned.  No mention is made of any other projects or relationships.  Frankly, discovering the connection with the Holy Cross Chapel took some additional research and came as a complete surprise. 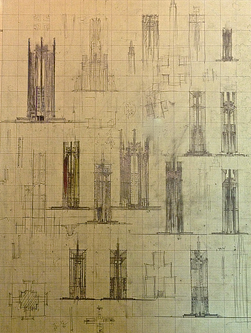 According to the LA Times 1988 obituary, Marguerite Staude went on to become an artist and sculptor in her own right.  She was also recognized as a patron for the arts.  The obituary mentioned the Holy Cross Chapel, but said nothing of the Cathedral design.  One look at the Chapel exterior makes it clear that the idea of a dominant cross-form superimposed over a building facade are related.  Having the same patron makes the connection even more direct.

But the links between the two projects are more than circumstantial as the idea nearly took form in Europe.  A conversation with Anat Geva, professor of architecture at Texas A&M and an authority on sacred architecture, confirmed the next twist in this story.  After getting rejected in LA, Marguerite commissioned Lloyd Wright to develop her vision for a congregation of nuns in Hungary.  Plans were underway when World War II brought the program to a halt.  In the years after the war, Marguerite decided to focus on her adopted state of Arizona, so the monastery project, like the tower, was abandoned.

Sometimes, the historic trail takes a false turn.  As I dutifully checked the Wikipedia page on the Holy Cross Chapel, the history noted that Lloyd Wright’s father, Frank Lloyd Wright, was the one Marguerite turned to when she tried to build in Hungary.  But the conversation with Professor Geva put this notion to rest.  “I lectured on the Chapel just recently.  Lloyd Wright, did both the previous designs, and Stuade really wanted him to do the Chapel.”

Apparently, Lloyd Wright wasn’t interested in the Arizona chapel project when Marguerite approached him in the 1950’s.  So the work of fulfilling her life-long vision was imparted to the San Francisco firm of Anshen and Allen, where project architects Richard Hein and August Strotz finally developed a concrete reality for Marguerite’s long-held vision.    The selection of the site was also quite a story.  Eventually, with the help of Sen. Barry Goldwater, the Chapel was built on National Park land in the Coconino National Forrest.

This time, the local Catholic Diocese accepted her project.  A nearby parish continues to maintain and administer the Holy Cross Chapel and holds some worship services there.  The chapel is non-denominational and has become a popular pilgrimage site for tourists and seekers of all denominations. 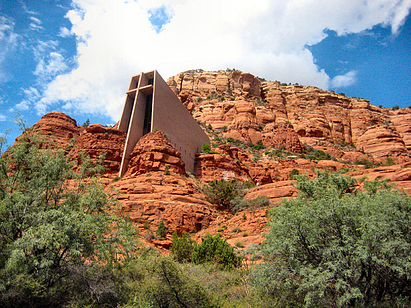 The Chapel is designed with a precise, distinctively modernist exterior that is juxtaposed against weathered rocks of the canyon wall.  But it is the singular, concrete cross that dominates.  The cross rises between two rock formations, as though a force from heaven planted it there.

The Never Built: Los Angeles show did remind me of an early lesson from my days in architecture school.  I recall hearing at least one critic say, “that’s a good idea, but not for this program.  Why not save it for the next project?”  From even the few sketches of the Cathedral Tower, it is clear that the concept may have been a bold idea, but it didn’t make sense for a Cathedral.  There was no indication of a worship space, and the Diocese would have little or no use for what must have been 50 floors of offices.

Eventually, decades later, the Diocese of Los Angeles did build a new cathedral, the Cathedral of the Angels.  It has a warm and beautifully proportioned interior worship space, and a modest wing for the Diocesean offices (not nearly a tower's worth of offices).  I did notice one element on the exterior façade, a simple panel of stone with a superimposed cross, that does reminded me of Holy Cross Chapel.  I can only speculate, but perhaps Rafeal Moneo was influenced, if somewhat indirectly, by the image of the Holy Cross Chapel when he designed the exterior of the Cathedral of the Angels.  Perhap’s Margurite Staub’s vision did have an influence on the LA Cathedral after all.

How do you create a spiritual place? Ben Heimsath writes about his own convictions for a successful design process in his recent article in Faith&Form magazine.  Download the article now.