If you don't already know of one, there's a good chance you'll be seeing an abandoned church sometime soon.  Last year, I noted that experts in historic preservation convened a conference in New York to begin examining this growing phenomenon.  Many older cities, experiencing population declines, have become painfully aware of the loss of their major landmarks.  As congregations either move away or close down, older, often gorgeously adorned edifices are being lost to the wrecking ball.

But this isn’t just a rustbelt issue.  With major shifts in population demographics, many communities here in Texas are experiencing church closures.  In my blogpost about the church preservation conference, I mentioned how important it is to find new, appropriate, and creative uses to preserve these special structures.  So I was particularly impressed by photos of an exciting church reuse, of all places, in Morocco, Africa. 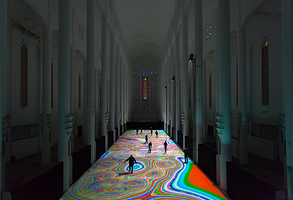 The old basilica church, Sacre-Coeur Cathedral in Casablanca, has, at least temporarily, been given an amazing new use by light artist Miguel Chevalier.  The interactive installation spreads a magical carpet of light on the floor of what once was the central nave.  Visitors are invited to engage with the changing patterns of colored pixels, swirls and grids.  Though decidedly not a liturgical activity, it appears from the video below that people are genuinely engaged with the space.  The soaring vertical room is re-energized by the playground of colors and textures covering the floor.

According to one travel site, the cathedral has been in disuse for many years, a remnant from the days when Morocco was a colony of France.  The church was constructed in a modernist style, mostly of cast concrete by French architect Paul Tournon in 1930.  Though stripped of its liturgical elements, the shape and volume of the space mark this as an unmistakable worship environment.

Spots of color from the large walls of stained glass appear to be the only distinctively church-related element that remains.  The windows, however, work surprisingly well with the colored light installation.  One important aspect of a successful church re-use has to be compatibility with the original church design.  The sensitivity of the artist, Miguel Chevalier, is in evidence as the church volume, the stained glass, and the light show all work together beautifully.

The art world, at least, as taken notice.  The website, Designboom has a nice writeup.  But don’t think that lights alone will successfully salvage every old church.  As I’ve mentioned many times, re-using an old church is never easy.  When someone's work is as successful and beautiful as Chevalier's, it is worth taking notice.