Part 2 – Vent Hoods and Grease Traps:  What are they and do I need them?

There are three basic vent hood types.  First is the typical vent hood you would have in a residence.  These simple hoods can either vent back into the room or can vent outside.  They are relatively inexpensive and easy to use, but don’t move a lot of air.  Second are Type 2 hoods, also known as stem hoods, which vent directly to the outside.  They move a lot of air and thus in many cases, outside air is blown into the room to makeup for the air that is removed by the hood.  The third type, Type 1, involves much more.  These hoods move a tremendous amount of air, and because the air could be grease laden the exhaust pipe has to be welded stainless steel and has a lot of restrictions on number of turns and length.  They also incorporate their own fire suppression systems designed specifically for grease fires.  Type 1 hoods work great and if you are doing a lots of cooking (especially if you are frying), they add a lot of safety.  However, they are expensive, loud, and intimidating to the casual user.  They also require a make-up air source, which can make it difficult to control temperature in the space when the hood is on. 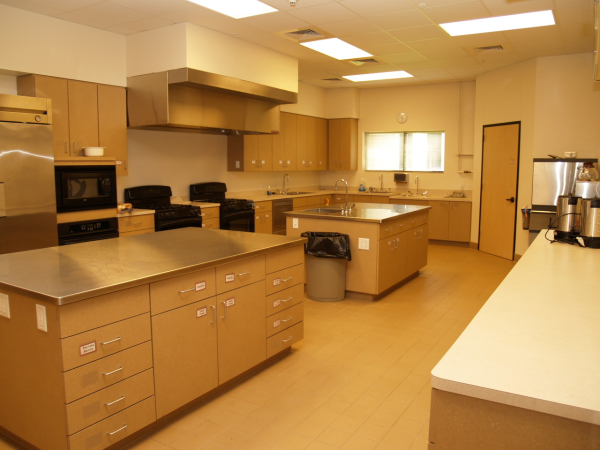 Generally (as with all of these issues, local conditions may vary), there are two factors that determine when a Type 1 hood is required.  First, if you have a full commercial range or a fryer you can pretty much count on the Type 1 hood.  Second, there is a section in the code (Section 507 of the International Mechanical Code) that says residential appliances used for commercial purposes must be treated as commercial.  The interpretation of ‘commercial purposes’ varies by jurisdiction. We have been required to put a full hood over a residential range in a warming kitchen because the code official interpreted the fact that the church was a commercial building to mean the kitchen was for commercial purposes.  The trend seems to be moving towards requiring the Type 1 hoods, so be sure to discuss this with your building official.  The only thing worse than being forced to add a Type 1 hood in your plans is to try and do it once construction has started.

Grease traps are special tanks designed to separate and contain the grease that ends up in the drain water of the kitchen.  Cities require these because if not captured at the kitchen, the grease coagulates in the city sewer lines and eventually clogs them.  City officials seem to be growing more cognizant of this issue and we are seeing more requirements for grease traps.  Having a grease trap is not a huge imposition other than the initial cost, which can range from $3,000 to $10,000.  Periodically (depending on your amount of grease) they need to be cleaned so they should be located in an accessible spot (most often buried).  They can smell, especially if above ground, so take that into consideration.

Also, if you do not have a full commercial kitchen, there are smaller sized grease traps that may be acceptable to the code officials.  This can save you some money.

Visit our Church Kitchen Resources Page or get the entire article by clicking below.