The State of Historic Preservation in Texas

I recently spent a delightful day as a juror for the annual Preservation Texas awards program.

My fellow jury members were Gary Dunnam a preservation advocate in Victoria, Sharon Flemming with the Texas Historical Commission, and Preservation Texas board member, David Bucek of Houston. Along with Preservation Texas staff member, Krista Gebbia, we immersed ourselves in reviewing some really outstanding projects.

There's no spoiler alert here. I'll leave it to Preservation Texas to announce the results. But for me, our discussions were as insightful as the work we were judging. The range of projects sparked some very exciting conversations concerning the state of historic preservation in our region.

Each of us knew all too well of the threatened deep cuts or outright elimination of historic preservation programs. None-the-less, most of our conversations centered on just how effective preservation efforts continue to be. We discussed the positive impacts in rural communities and urban centers. Beyond just preserving history, we examined the way nearly all of these projects were giving our contemporary communities a lift.

In a state such as Texas, where much of our built environment is relatively new, it is impressive to realize the continuing significance of our historic fabric. One of my colleagues offered a quote to summarize how often preservation is misunderstood. She notes that people assume the program has limited potential. "Aren't you going to finally get finished preserving them all?" No the need isn’t going away. Preserving a building is so much more than just fixing up an old place so it looks new.

Here are some of my thoughts on the greater of value Historic Preservation:

It seems obvious, but a preserved environment really is the ultimate history text. Nothing is more immediate than literally walking through the spaces and places from a previous era. But lessons in sociology, commerce and civics are also encapsulated in the architecture of a given time. These disciplines, too, may be experienced physically by experiencing their influence in the built environment.

We noted a significant number of ways that preservation projects have had an economic impact. Going beyond the submissions, we noted that historic preservation has been successful in sparking redevelopment in neglected areas. The impact is equally striking for both urban and rural communities. Grants and support from numerous agencies can leverage significant public and private investments and donations. Were it not for agencies like the National Trust, the Texas Historic Commission and many civic and local groups, the opportunity for redevelopment or re-investment might have been missed.

Simply put, a well-built, well-designed building that has provided many generations of use is likely to be a community landmark. Even when activities change, there's something special about the continued use of a space with its history intact. We discussed the importance of civic expression in many forms beyond individual buildings. When entire districts are considered, it is often the historic places that serve as the defining images or the memorable anchors. When these are upgraded, restored and preserved, the entire area is given a boost. 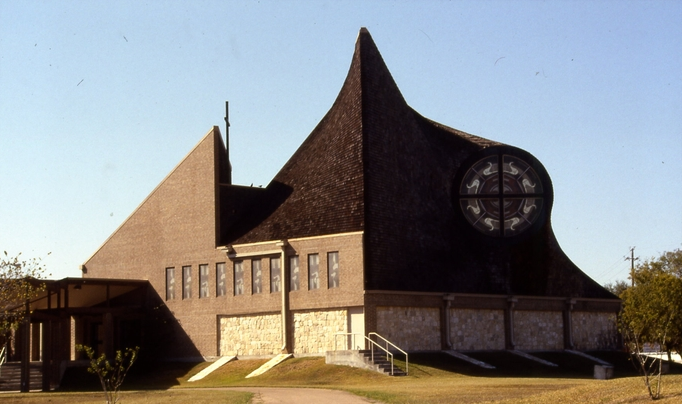 Episcopal Church of the Epiphany is one of the firm's early modernist designs.

These were my musings as I drove back home, exhilarated with the state of preservation in Texas. We're all reaping the benefits of some amazing efforts and we'll continue to enjoy them for many years to come. There's even some exciting new efforts to recognize modernist landmarks and to save them from demolition or neglect.  Check out Houston Mod's efforts. No we'll not be running out of places and projects that need our help. The current downturn is just the latest challenge, but it also is the latest opportunity to make the case for historic preservation.