How To Get A Permit - Explaining The Codes - Part 2

"How I stopped hating the permitting process and learned to live with the codes."  I've given this lecture many times in the past.  This post is one of a series of articles on how to deal constructively and successfully with building codes.

Recently, I've looked at on-line sites to see what advice is available for getting a project or building permit.  I was amused to see some overly obvious answers: 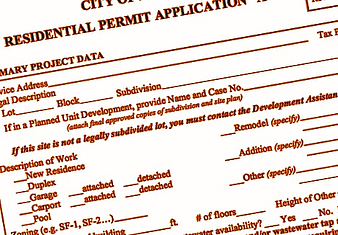 Wow, wouldn't it be great if it really was that simple!  It may work for a small project in a particularly helpful jurisdiction, but it's been many years since we've encountered any permit that easy.

So what must you do to get a permit?  In many cases, your architect or builder may have the experience necessary for your project.  In other situations, an expeditor or facilitator may be helpful.  In any case, for a small or large job, I strongly advise owners to educate themselves about the process.  Even with an expert representing you, a good understanding of the process can make all the difference.

KNOW THE JURISDICTION
The most important issue, for starters is to know your jurisdiction.  When I work in a new area, I like to get a copy of the development codes for a preliminary review.  Many cities and townships have their codes on-line.  Austin is one of the earliest cities to have its development codes and processes on-line.  But not everything is available.  In Austin, some critical pieces, including the transportation standards, have only recently been posted electronically.

A local code still can only tell you so much.  Various groups, agencies and departments may have specific standards or requirements.  Why the agency exists, and what it regulates seem obvious, but they are important to know.  I often find useful information by reading the enabling language or a statement of purpose for any new jurisdiction.  But often, knowing one jurisdiction isn't enough.

OVERLAPPING JURISDICTIONS
Get used to it, regulatory agencies overlap and at times contradict each other.  Generally, most requirements are from agencies or departments at the local level.  But some permits come from regional or state agencies.  Over the last few decades, even the federal government has gotten into building regulations, most notably with the Americans with Disabilities Act (ADA).

Don't these agencies work with each other?  Some do, but most are organized around the primary issues they regulate.  For example, we've had a site reviewer in our city approve a driveway based on the anticipated parking load.  The fire department, however, was ready to reject it, based on the size of emergency vehicles.  We quickly negotiated a compromise that both agencies would accept.

Many conflicts require a variance, change or waiver to resolve.  These may be handled administratively by the staff or require a public hearing.  Once again, the requirements are likely to be spelled out in the documents.

Knowing the agency's purpose and guidelines can make a huge difference, especially for a public hearing.  More than once, I have listened from the dais as petitioners have made impassioned pleas for something that was simply impossible.  They were asking the wrong group! It would have been so much easier if they only had known what was required and where they were supposed to go. 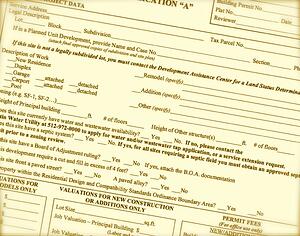 And there are many overlapping regulators, so there are lots variances or waivers.  Several years ago, our region studied its jurisdictions and discovered there were up to 60 different agencies or departments that may potentially be involved with a building project.  The study noted that in some California regions, there were as many as 120!

Sadly, very few states or regions have a system for dealing with multiple agencies.  I was impressed to find clearinghouse systems established in several areas in the Northwest.  Our firm hasn't had projects in those areas to test their effectiveness.

It may seem by now that the wild maze of codes it just too much for any mere mortal.  If it is any comfort, I believe that a good project, with the right approach will get a permit.  The time, aggravation and cost, however, can vary greatly.  What's the right approach?  How to lessen the risk?  That's for a future post.