Salvage or demolition?  Too many times we've encountered the owners of an old building who tell us that some expert (engineer, contractor, architect) said the structure couldn't be saved.  The fact is, there are very few buildings that have been so neglected or deteriorated that they truly can't be saved.  There are many inventive ways to re-use or re-purpose a building.  You just have to stop and properly evaluate a building's potential. 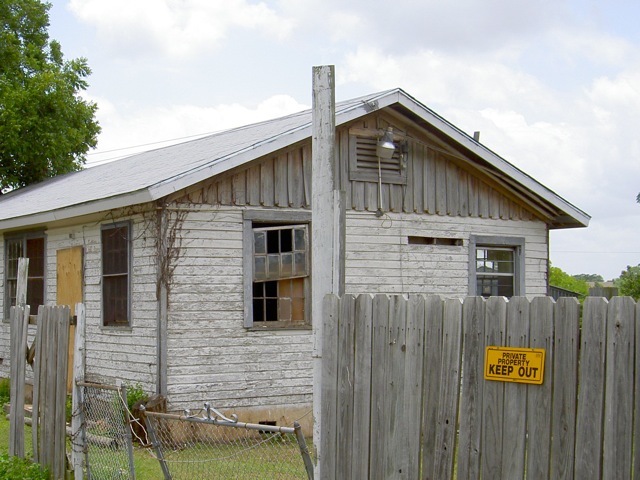 There are lots of reasons to look seriously at rehabilitation.  From a sustainability perspective, the more an existing structure is salvaged, the less waste goes into landfills.  A deeper analysis of the carbon footprint strongly suggests keeping as much existing building as possible, in part because fewer new materials means fewer carbon emissions.

My wife and I took on an ambitious project recently, which illustrates some of the best practices in bringing derelict buildings back from the brink.  In the process of saving two houses from demolition, we found an even bigger opportunity to make something incredible from a neglected old structure. 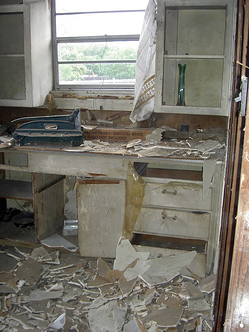 When we started the project, the challenge was finding a place move the two houses.  We found a great site with two adjoining lots.  However, right in the middle of the property was a horribly run-down shack.  I was certain we'd knock it down, cart off the rubbish, and then start the move.

But a closer inspection revealed a complete surprise.  On the surface, everything in the old wooden hovel was cheap and poorly built.  But the structure underneath was massive, and still in great shape.  Someone had built the shack out of 2x12 lumber.  They had spaced the joists and rafters at one-foot intervals.  For comparison, even well built wood construction these days is made of 2x4's or 2x6's.  Joists and rafters are commonly spaced at 16- or 24-inch intervals.  This made no sense.  Beneath the trash, garbage and rot was an amazingly strong and durable structure.  We couldn't throw all this in the landfill! 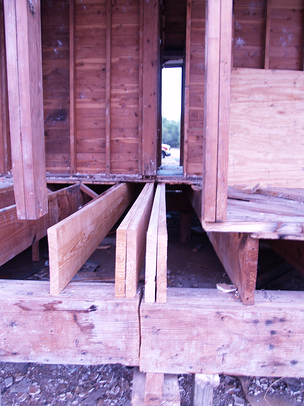 A neighbor finally helped solve the mystery.  Right after the Second World War, the local air force base decommissioned all the wooden barracks.  They sold them in 50-foot lengths to anyone who could bring in a flatbed truck.  Our shack was one of those barracks, and yes, it was exactly 50 feet long.  The 50-foot dimension gave me an idea.  We could cut the structure in half.  Each of the sections was about the length of a two-car garage.  We wouldn't park in them.  My idea was to lift up the sections, build new garages under them, then a garage apartment upstairs. 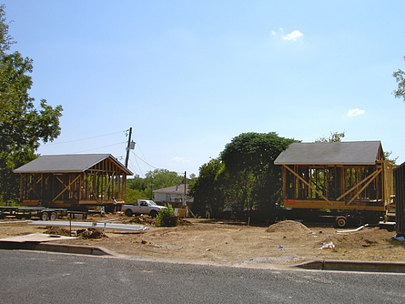 We finished the first apartment in 2007.  It was ready long before the houses were complete, but our newly married daughter and her husband had no problem moving to a fancy place in the middle of a construction site.  One of the best decisions we made was to carefully arrange the interior so both the garage and apartment functioned well. 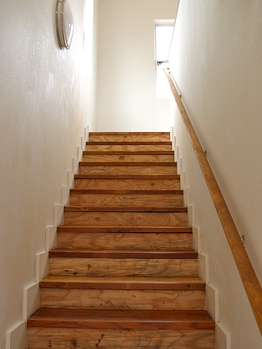 Even though it took up a lot of space, we placed the stair on the interior and located the apartment door on the front face of the garage.  This has proven to be a very good security arrangement, and it also makes the one-bedroom apartment upstairs feel bigger.  To make the downstairs landing feel welcome, we used some of the old 2x12 lumber as stair treads.  Those old planks look pretty neat and they make a visual connection to the incredible heritage of what was once a hopeless old shack.

The garage and apartment completed - and transformed into a great asset!