This past weekend, I was digging up tiny trees out on the family farm.  The overgrown clump near the tennis court had swallowed one too many tennis balls. 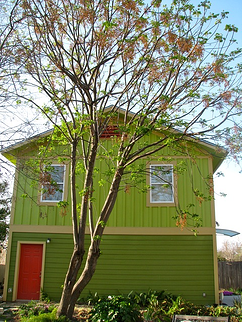 Two weeks ago, a crew consisting of my brother, my brother-in-law, my sister and their son initiated a massive hacking and clipping in order to thin the thicket.  But this weekend, I returned to claim my bounty for a free landscaping idea - salvaged plants!  I dug up shovels full of young plum trees, bagged them up and headed for home!

I've blogged about salvaging buildings, but one additional trick was to do the landscaping using mostly salvaged plants.  That means our yard took a lot of hard work, but cost us almost nothing!  I can't say the work was entirely free; we did purchase two shade trees and some bushes, and I bought some extra hours of labor from our yard crew.  But for the amount of planting we needed on two lots and over 15,000 total square feet, we couldn't have afforded a fraction of the landscaping.  With some time, some vision, and some creative salvaging, we've established a credible garden and yard using mostly salvaged plants. 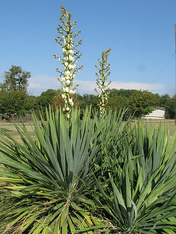 Our project began when we decided to rescue the two houses from demolition.  The houses were on a site that still had remnants of an old garden.  Since the property was going to be completely torn up, we began an earnest campaign to dig up any of the plants that we thought we could save.  Most of the yucca in our new location came from the original site.  Some interesting kinds of sedum also were saved.

At the same time, we were involved with another demolition / redevelopment project in an adjacent neighborhood.  That property yielded several surprising plants, including a striking taro plant that is established so well on our new site, it grows nearly 10 feet high in the summer.  Later, we salvaged stone pavers from the same property, which have continued to provide stacking and edging stones for our planting beds.

One of the best sources for salvage was the new property itself.  When we decided to save the old barracks, we also noticed the overgrown mess of a chinaberry tree.  With some creative pruning, the tree is now a great shade canopy against the western sun.  The sickly oak tree in the front yard just needed some coaxing.  In the past four years, with proper care, it has almost doubled in size.

When we sold our old house, we brought along clumps of plantings that we hoped would readily propagate.  We were delighted to be able to use our familiar river ferns and purple hearts in appropriate beds.  We'd been nursing several specimen plants at the old place. 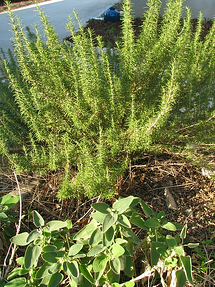 They were so anemic looking, we realized the new owner would either yank them right away, or they'd die without the constant care they required.  Surprisingly, the rosemary bush and the acanthus both took immediately to the transplanted location.  We speculate that both plants were in beds that didn't drain very well, so the replanting actually saved them. 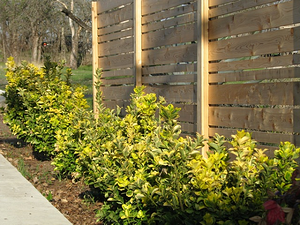 A last surprise was the number of plants that friends, neighbors and family gave us once they heard we were salvaging.  My wife's mother had purchased too many golden euonymus, so she gave us the extra.  They've grown slowly along the side property line, and now stand smartly in front of the decorative fence we've recently constructed.

Probably the most dramatic gift plants were the blue agave.  A neighbor gave us several small pups as we moved into the new house.  We placed them with plenty of room to grow in the front bed.  In a few short years, these incredible plants have transformed themselves into spikey sculptures.  Against the bright colors of the house and the rustic stone steps, they create a timeless landscape next to the front porch. 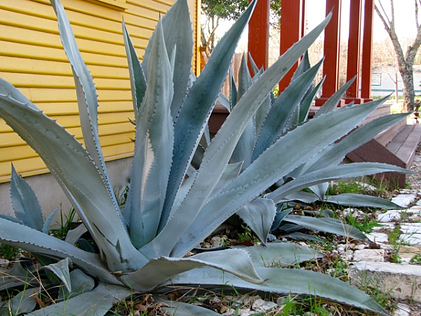 Using salvaged planting has some significant benefits - we've had very few failures.  It occurs to us that, with some exceptions, the plants we've been using have all proven themselves in our local climate and soils.  Many of the plants are natives, but even those that aren't are generally well established and therefore very likely to thrive. 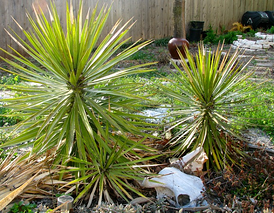 The other surprising benefit of using so many salvaged plants is that each one comes with a history.  When I tend to the yucca, I'm reminded of the houses in their derelict condition back on the original site.  The whole history of the project can be told with one stroll through the garden.

And the plum trees are for the next round of landscaping with salvaged plants.  Sadly, the bottle brushes, some of the few plants we'd purchased, froze completely this winter.  Tom Spencer, of the Central Texas Gardener, confirmed my worst fears.  "The hard freeze probably killed them, they're not coming back," he told me recently.  So, what to do?  Salvage some trees, of course!  What better trees to salvage than ones that are so overgrown.  My only question is - why I didn't think of the plum trees sooner!