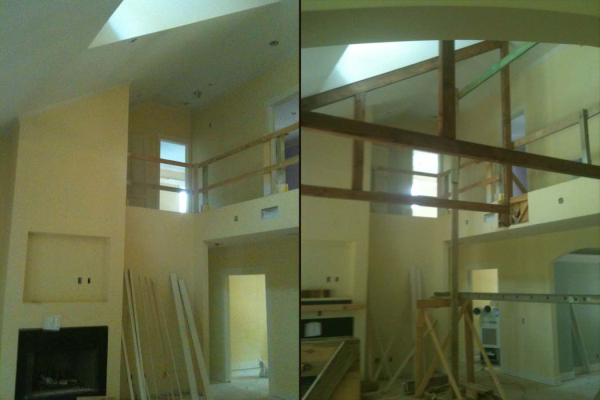 The two in-progress shots show the great room before and after the trusses were added.  The first shot is a much more modern open space; however, that was not the look we were going for in this particular house.  The second shot shows how the trusses make a more intimate space, without lessening the volume and connection to the second floor.

When Karen and I were designing the great room for our new house, we had two competing interests -- though both stemmed from the desire to have a cozy family home.

First, Karen is not very comfortable sitting and reading/conversing in large double height spaces like you often see in great rooms, and from the outset we wanted to make sure that all the rooms (and especially this one) were comfortable and usable.

Second, expanding the house on the existing footprint caused us to put the kids' bedrooms on the second floor (we left the master down).  We really liked the sense of connectedness provided by the smaller house (the children are not quite teenagers yet so I understand that this may change) and we didn’t want to have the kids isolated in their own area.  To keep the house more intimate, we designed the circulation to their bedrooms to have an overlook of the great room.

The question became, how do we have the overlook and still have a cozy, comfortable room to sit in?  The first thing we did was to have the ceiling slope up from the outside wall, which gives us a lower ceiling at the outside wall but enough ceiling height for the overlook (Using a 7/12 pitch helps).  We also chose to put in an operable dormer window at the second story level.  This adds a nice view from the second-floor railing, helps with air circulation, and also brings more light into the space -- a real benefit for a north-facing room with heavy tree coverage.

The second design element was to add two heavy timber trusses to the space.  These trusses are not structural (it was much easier to build the house and then put in the trusses), but they serve a very important role.  The two horizontal members begin to imply a ceiling level that makes the large space feel more intimate while not actually reducing the connection to the second floor.  With the trusses, the space changes from a open, clean modern look to a cozier arts and crafts look.  This will be even more apparent when the railing is built, as it is more solid than most.

Beams, collar-ties, rafters, even fabric -- anything that starts to create a plane in your peripheral vision (even if it is widely spaced) -- helps create smaller spaces within a larger space.  The concept of perceived enclosure works with wall elements and landscape elements as well and is effective in many different design styles. 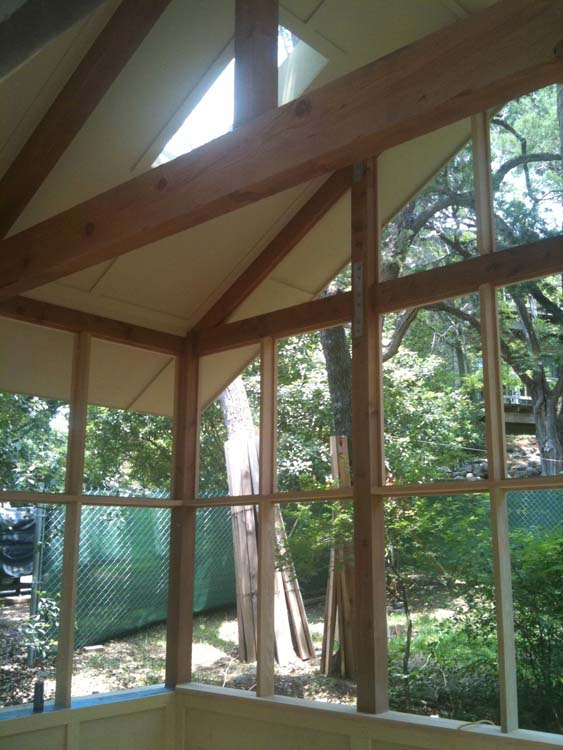 We used a similar truss element in the screen porch.  The ceiling is high to allow as much light into the house as possible (the skylights really help here), so once again we decided to use a truss element to activate the volume of space.