A Closed Street Can Have Surprising Benefits 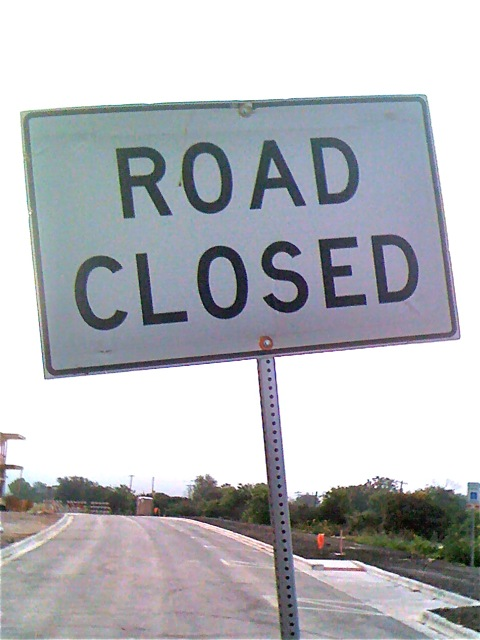 As a planning commissioner, I took a strong stance against street closures.  In the late 90's, we had a wave of applications from builders trying to make their projects feel more exclusive.  Those requests really bothered me.  A public street is an essential connector that makes private properties into a city, town or neighborhood.

If these requests had been approved, (and nearly all were denied) the street would have remained as a public right of way, but a barricade would have kept the public out.  That wasn't fair.  Also, it would have cut off access to and from the rest of the city.

So. . .it is a big deal for me to promote the surprising benefits of a closed street.  There are times and places where I feel just as strongly that a closed street is a good idea.  In fact, we've completed two projects recently where public streets were closed and made into private property - and everyone benefited.

There are several critical issues in determining whether a street closure is appropriate.  For example, who will actually own the street?  Will it be a public, civic or a private owner?  Who will maintain it?  When the street is closed, what spaces are created for the public benefit?

Here are some great examples of how streets can be closed - for the right reason.

In these instances, the street remains a public right of way, still owned by the city or town.  The adjacent user is allowed to erect barricades to cordon off automobile traffic only for special occasions when lots of people need the space.  We have advocated for this type of temporary closure on several occasions.  In one recent example, a church was allowed to restrict access on Sundays so children could safely move between the sanctuary and their classrooms across the street.

At the famous Shrine Auditorium in Los Angeles, the street in front can be temporarily closed for large gatherings.  We attended an event there recently, and the crowd naturally lingered and socialized in the street after the program was finished.  Special paving on the roadway made the space feel like a large plaza.  On a normal day, however, the street remains open for local traffic.

A closed street can become a connecting place.  Some uses are best connected with outdoor plazas or walks.  This works well, so long as there are sufficient streets nearby for automobile connections.  Another example from Los Angeles; the street between two buildings has been closed by the Southwest Law School.  This creates a welcome green space right off of busy Wilshire Boulevard.

I spoke with one of the administrators involved with the development, and it looks like they will extend the closed area in the school's current expansion plans.  I did not determine whether LA sold the street to the school, or the school created the green lawn on a long-term lease.  In any event, while the school makes regular use of the space for its functions, it is required to allow local residents pedestrian access.

My very first experience with the process of street abandonment came early in my career.  A church had purchased a foreclosed commercial property that had platted a street, but never actually built it.  We realized that the street was not necessary; in fact, it split the church's property in half.  With some good explanation, we were able to get the property back from the city authority that owned it.  A current client faces a similar type of closure, though the street in question has been paved.  We are making plans, once again, to remove an unnecessary street to improve the church's development.

Our two most recent projects that benefited from a street closure consisted of projects where the site was re-worked by removing public streets. 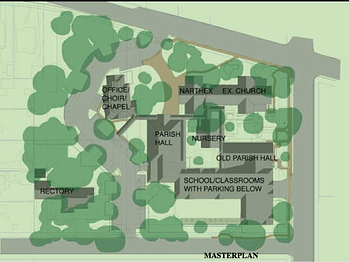 At the Episcopal Church of the Good Shepherd in Austin, the street closure allowed a consolidation of the most intensive uses away from the residential neighborhood.  In place of the public street, we created a meandering drive through the property.  The driveway also allowed us to expand the overall number of parking spaces.  The neighbors were happy since we reduced the need for church parking up and down the remaining streets.

At First United Methodist Church in Temple, Texas, the church was able to close an intersection and create an urban campus.  We placed a badly needed fellowship hall and classroom building right in the middle of what had been a through street.  Once again, the consolidated plan separated the parking spaces from the buildings, lawns and walkways.  The result is an organized collection of buildings that compliment the distinctive historic sanctuary.