Does the activity of worship transform a space?  Yes, absolutely it does.  Ceremonial elements or liturgical objects convey meaning even when no one is present.  In most Christian faiths, the altar, pulpit, or baptismal font are the primary objects.  One of these will generally become the liturgical focus.

I visited the American Martyrs Catholic Church in Manhattan Beach, California and saw a great illustration of how these liturgical objects can be featured.  The liturgical focus of the American Martyrs worship space is on all three, the altar, pulpit and font.  You can't help but notice.  Along with the crucifix, they are clearly the most visible elements as you enter the church.  The three pieces are crafted from the same marble, and made to look as big and massive as possible. 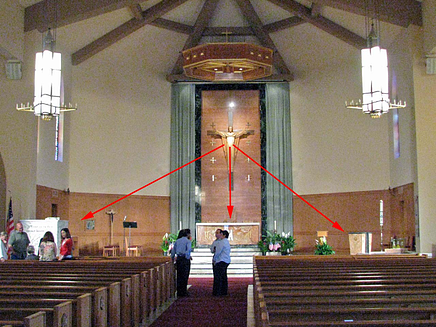 Richard Kieckhefer, a professor of Religion and History at Northwestern University devoted an entire chapter in Theology in Stone to the issue of liturgical and visual focus.  He calls the prominence of liturgical elements: centering focus.

"The question to ask is not merely what (if anything) a church takes as its defining center, but how the centering focus functions and how its centrality is signaled." 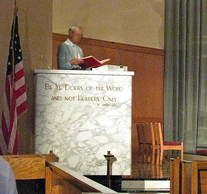 The American Martyrs example is very clear visually, but may not work functionally for many churches.  These elements are so big, they can feel like a barrier to the congregation.  Considering the original church was built in 1956, however, this traditional orientation offers a remarkably clear catechesis: 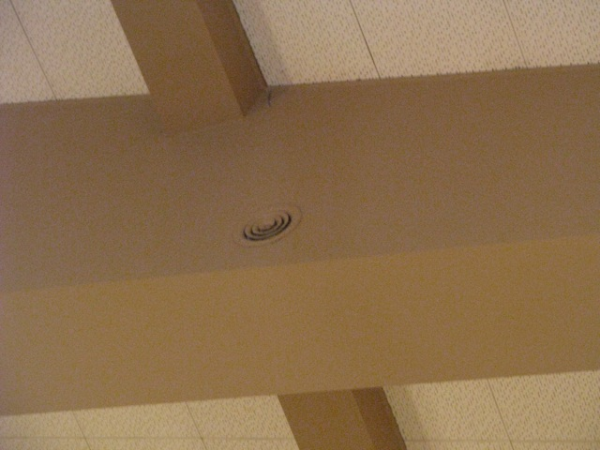 I was also struck at the effort the architects made for the non-liturgical elements that might be a distraction.   Other elements or building details can easily interfering with the experience of worship, but here are remarkably well hidden.  The air-conditioning ducts are hidden by expanding the shape of the structural beams spanning the nave.  Look closely - the only evidence of the mechanical system is the round register on the side.

It looks like the lighting was added at a later date, but this too was very sensitively installed.  On the sides, large wing-walls extend out to cover a mix of assorted fixtures. 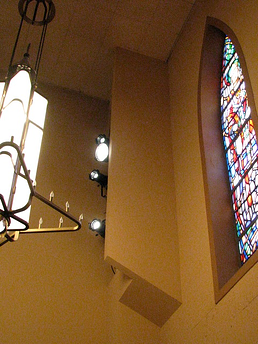 So maybe this isn't the most flexible or functional space for modern worship, but it is a wonderful illustration of how clear liturgical focus can be achieved.  In this case, the liturgical elements are really emphasized.  However, equally important, those elements that could be a visual distraction have been artfully hidden.