Austin to LA - Mid Century Modern Sources at the LACMA 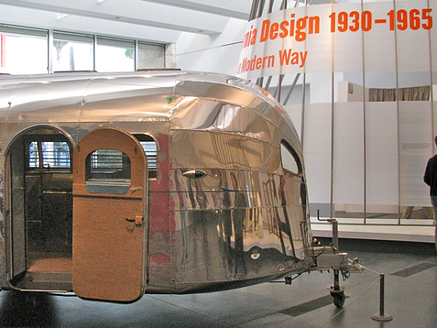 The exhibit bills itself as "the first major study of California midcentury modern design." Currently on display at the Los Angeles County Museum of Art are over 300 objects of remarkable diversity.  It includes lamps, textiles, graphic design, fashion, costumes, jewelry, architectural photography, a car, an airstream camper and even the original Barbie Doll.  In Austin, we're particularly interested inmany aspects of mid century modern design, so we were delighted to have a chance on a recent West Coast visit to see the show.  There are two major standouts, upon reflection, that most capture the theme of "living in a modern way."

The first is an amazing number of chairs.  Some of these designs are quite familiar.  Several have become iconic, a must-have for many high-end interiors.  There are others, such as the molded fiberglass chair, that have been reproduced so often and with so many variations, it is truly amazing to encounter the first of its kind. 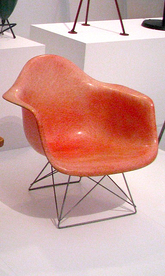 Each of these chairs might  easily and for the most part, comfortably, be used today.  But each one also reflects the mindfulness of the designer in crafting a simple and appealing object.

The second standout is the exhibits' understated centerpiece.  An entire room from Charles and Ray Eames' home is featured (unfortunately, no photographs allowed!)  This remarkable couple had an illustrious career as innovative designers, and the Eames name has been associated with furniture that epitomizes modern design.  I expected Eames' designs to be on display, but the LACMA actually recreated a 17-foot high interior to hold everything from the Eames' living room.  This fortuitous timing was made possible because the house is currently undergoing a restoration program.  Here's a link to a remarkable video as 1,800 personal objects were painstakingly moved, "untouched," as it were, and reassembled in the museum.  They will all be put back in place when the work is completed and will become part of the Eames Foundations' house museum.

The surprise here is just how normal the space feels.  Though the Eames' residence was well publicized and celebrated as a prototype modern interior, it is quite informal and inviting.  Without a connection to the Eames legacy, a visitor may be puzzled by the inclusion of this nice, but not particularly spectacular space.

My wife and I had somewhat differing opinions about the space and it's significance.  She felt that the space was filled with so many objects that the iconic pieces were overwhelmed.  There were objects and collectibles from all over the world, all kept as inspiration for the creative couple.   Amidst the clutter, however, the featured furniture seemed less significant.  Even the celebrated recliner, the chair most associated with the Eames name, didn't stand out as anything unusual or exceptional.

I noted that so many of the mid-century objects expressed a comfort and informality.  Their simple style lets them fit in and adapt to different spaces.  That's the reason so many are now considered classics.  You didn't need a pool or cabana, for example, to enjoy the chaise lounge chairs.  The simplicity and durability made them flexible.

I know this from first-hand experience.  My parents were eager buyers of modernist furniture.  As a young co 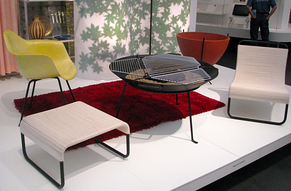 uple in the 50's and 60's, they bought chairs, sideboards and tables that were remarkably affordable.  Though our family home changed several times, and the styles changed (from high Victorian to country farmhouse) my parents always adapted and the furniture somehow fit in.

And with the wear and tear from five children, friends, other family and pets, it is remarkable how well these pieces held up.  I have the old Eames recliner in my study today, along with other mid century furniture that has survived many situations and placements.  Its no wonder the mid century modern furniture is growing in popularity and is once again widely available.  Oh, and you can buy a Barbie Doll at the LACMA exhibit as well. 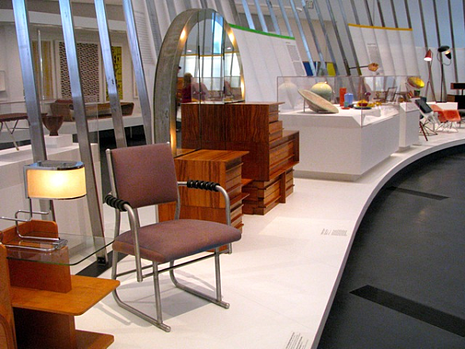