Which building is the greenest?  How about the one you already own?

The results of a ground-breaking study were released last week by The National Trust for Historic Preservation.  The data shows for the first time how an old building stacks up against a potential replacement building.  Even a highly efficient new green building doesn't pay off compared to a renovated or upgraded existing structure.  The sustainability advantages of keeping an existing building vary widely based on the building's age, the use, materials used and the climactic region.  However, using life cycle analysis for materials and energy consumption, in nearly every category studied the advantage goes to the renovated building. 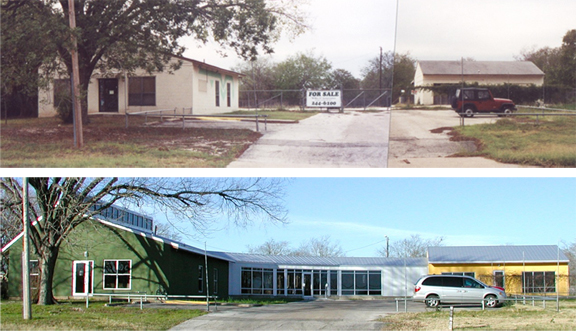 Before and After - Just empty buildings when we started, but with renovation, addition and adaptive reuse they were transformed into our office.

The study, titled "The Greenest Building:  Quantifying the Environmental Value of Building Reuse," begins with some surprising statistics.  Every year in the US, nearly a billion square feet of existing buildings are demolished.  The report cites the Brookings Institute projection that between 2005 to 2030, at our current rate, nearly one quarter of all existing structures will have been torn down and replaced.  While it may not be efficient or cost-effective to save every building, we can only conclude that this trend points to a colossal waste.

Since the early days of the firm, we've been re-using, renovating and adding on to preserve existing buildings.  It's great to find even more reasons to keep an old building, and we hope more people will take a fresh look at the buildings they already own.  I've included several before and after images to show what's possible when we get creative about preservation and reuse.

This house had been upgraded on the interior so the new porch addition gave it an entire new look. 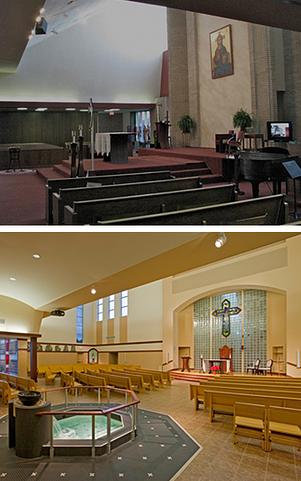 By expanding to the sides and reworking the structure, the addition doubled the seating and completely transformed the worship space.  St. Albert of Trapani, Houston, Texas. 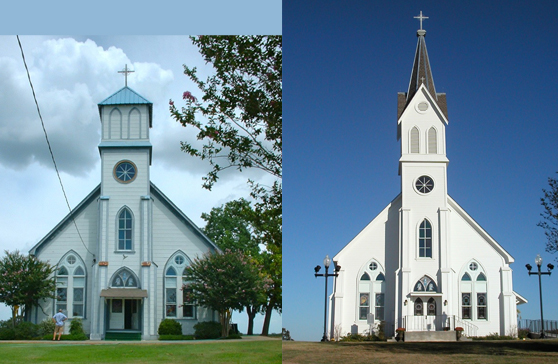 The old steeple was recreated from historic photographs as part of the major restoration and preservation program.