Demand Charge for Church Electricity: Is This a Good Idea?

So what is a demand charge and why should churches care?  Churches should care a great deal.  If you are not paying it now, watch out!  It could equal or even exceed your consumption charge in a given month. A demand charge for church electricity bills is seriously being considered by our local utility company.  Some utilities already have added this charge for churches, and may soon expand or increase its use.

A Problem for the Catholic Center

The experts at Austin Energy met with us recently to look over the University Catholic Center.  We completed the building almost a decade ago and we've been helping the business manager find ways to save 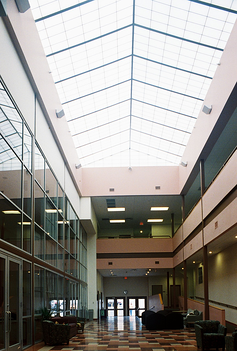 energy in anticipation of electric rate increases.  The Austin Energy policy currently is to charge churches a residential rate for power consumption only.  There are active plans to shift all churches over to commercial rates, though the program is currently on hold.  That shift would also subject churches to demand charges.  We found out at this meeting, just how ill-prepared the Center was for this new charge.

We reviewed the previous bills for the Center and determined the electric bill would have shot up by at least a thousand dollars each month if there had been a demand charge.  The Austin Energy engineers toured the building and noted the equipment, the lighting and the overall use of the facility.  By far the largest cause of the demand was the air conditioning equipment.  There really aren't ways to use less A/C when the building is in use.  They suggested that by staging the start-up of the motors, we could at least reduce some of the demand charge.  That would require brand new equipment, or a completely new control system.  But that also would be a huge investment for units that are relatively new and are only used once or twice a week.

Why Have Demand Charges? 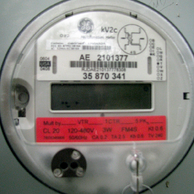 Electricity isn't a commodity most of us understand very well, and the way electric companies do their billing can be very confusing.  But simply put, a consumption charge is billed for the amount of energy used each billing cycle.  A customer pays for the power used in a given period of time.  The demand charge is an extra fee based on the highest use (over a 15 minute interval) in each billing cycle.  A customer is paying for the capacity to have the maximum service on demand.

Since power companies can't store power, they have to be able to provide, at any one time, all the electricity needed for the highest demand.  If that demand is beyond their capacity, then the system fails.  Customers start having brown outs or black outs.  Their power is reduced or cut off completely.

In theory, the demand charge becomes an incentive for large customers, mostly commercial businesses, to minimize or eliminate their spikes during the peak hours. They can be rewarded financially for shifting operations, increasing efficiency, or staggering equipment start-up.  When this happens, the maximum demand for the entire area goes down.

But churches aren't like large companies.  They can't shift or move operations to different times.  They might benefit from more efficient equipment or sophisticated control systems, but most churches don't have the up-front money needed to invest in them.  Some experts have suggested taking weekends out of the demand period calculations.  But even this action won't really help most churches.  All it takes is one 15 minute spike in energy use, and the church is stuck with a whopping charge at the end of the month.

We looked at the Catholic Center's demand calculations to see how removing Sunday would effect the demand charge.  The conclusion was pretty obvious - not much, or not at all.  We were touring the building on Ash Wednesday.  The Center had been open early that morning and the weather was warm outside.  The AC units were all on, as were the lights, the music equipment etc.  The elevator was in use.  Staff and students were in and out of all parts of the building.  In short, the Center was hosting hundreds of people and a wide range of activities.  It was exactly what the building was designed for, and it was being used at maximum capacity. 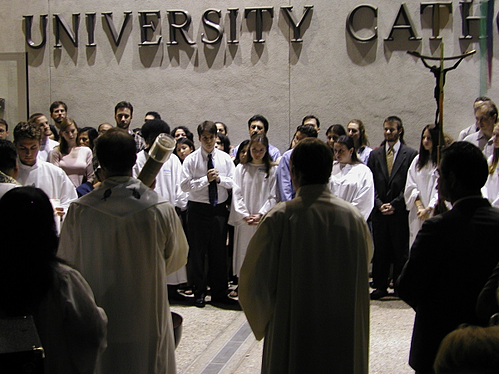 Something is always happening at the University Catholic Center!  And that's why demand charges are so challenging!

Of course, the building was also at maximum energy use for more than 15 minutes.  The only way to have eliminated demand charges that day would have been to shut down or close off one or more activity.  While the Center doesn't run at maximum capacity all the time, on any given month it is not unusual to have overlapping activities that would cause a demand spike.  Our plans to help reduce overall energy consumption with efficient lighting etc. may make little or no difference thanks to these extra charges.  And since Ash Wednesday, or Good Friday, or orientation week, or a funeral or wedding can't and won't be put off until the weekend, the Center will be stuck with the bill.

Demand charges for churches?  The answer must be an emphatic "NO!"  However, if they are coming, and it looks like they are, churches will have to make big changes (future blogs on this topic?) or bear the brunt of dramatic escalations in their electrical bills.

An Austin TV station featured another our our clients, First United Methodist Church and their fight to prevent Austin Energy from adding the demand charge to their church customers.  Here's a link to the video.

Do you need to know more about lighting?  Want to understand the basic differences in lighting types and technologies?  Eric MacInerney uses plain language to give you a solid understanding of lighting basics.  Download this great resource now: