Sacred Place is Home For The Arts

In the early 1970s our firm had just completed an innovative branch library in a developing area of Northwest Houston. It was an instant community success and shortly thereafter the pastor of a local church, Glen Wilkerson met with me to share his vision for a new kind of church ministry.  He wanted to create a sacred place that would also be a home for the arts.

Cypress Creek Christian Church purchased the property adjacent to the library.  From Glen's roots in the Disciples of Christ Christian Church, the plan for the new congregation was to include arts organizations and community groups as partners from the very beginning.  The Church would develop the property as both a place for worship and a community center. 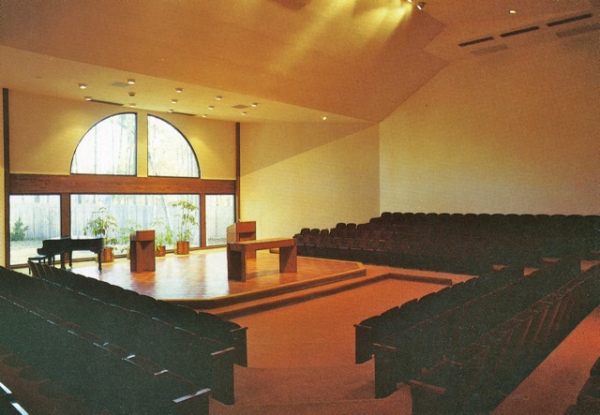 This vision meant that the buildings should simultaneously serve as a ministry center for the growing church and as home for an active arts scene. We developed a design for the first building that functioned for professional theater and music performances and seamlessly switched to worship services.  Opened in the early 1970's, the Centrum, as it was named, proved the vision could work and became a model for other shared-use facilities. 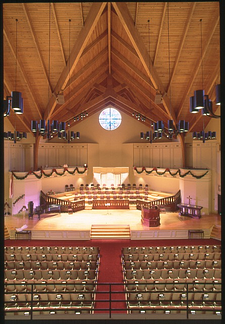 Meeting the requirements for a high-end performance venue, including exacting acoustics, the plans needed to accommodate the Houston Symphony Orchestra.  For church needs, the same space was designed as an inspiring and functional place for worship.  Our program considered the subtle but important shifts necessary to transform the space from one use to another.  Some elements were planned to remain fixed, yet were designed in such a way that they complement the secondary use.

Today The Cypress Creek Christian Church and Community Center is used by 120 non-profit organizations annually. The original church building (renamed The Forum), continues to be used for gatherings up to 350.  The new building now bears the Centrum name, and is one of the major performance venues in the North Houston area.  The space seats 900, and hosts a regular music and performance series.  A gallery space is reserved for art displays.  The congregation fully uses the exact same spaces for many church activities, including many vibrant and music-filled worship services.

As stated on their website - The Cypress Creek Christian Community Center is a unique community-partnership model for meeting the educational, humanitarian, spiritual, and cultural needs of Northwest Houston

In the four decades since Glen Wilkerson first met with me, Heimsath Architects has worked with many faith communities to incorporate outreach and the arts in their ministry.  From our experience with many church and community programs, let us suggest these four key elements.

For the Cypress Creek design, we diagramed activities for each day of the week, from 9 AM to 10PM. We noted all church functions and all planned locations.  It became very clear that a great deal of space was available for other non-church uses.  More church activities would be added as the church grew, but seeing the hours and hours of unused space helped us in planning for outreach.

2. Define what is sacred and what is secular.

It is not that all spaces should separate the two, it is possible sacred and secular can be combined.  It is critical, however to consider each function independently.  Actively discuss how a place to worship God will transform to a community hall or performance venue.

At Cypress Creek we designed the first building based on a  “double-grid” geometric layout.  The focus of some spaces aligns with the 90 degree axis, the focus of others are on the 45 degree grid.  This geometry gives the space some excitement, while providing visual cues to distinguish one activity from another.

3.  Circulation and signage are crucial.

Nothing is more discouraging  than pulling at a door that is locked, or entering a dark entry space and wonder where to go or where the offices are.  Many churches have the space for the community and art activities, but they won't necessarily function the same way. With proper planning the expectations of a new visitor can be met with clear circulation.  When clear paths and entries aren't readily available, at least use good signage.  A person arriving for the first time shouldn't worry about getting lost or disoriented, whether they come for worship, or for the arts.

4. Make the space exciting and welcoming.

With more than forty years of constant use, the original Cypress Creek building still conveys an exterior excitement generated by the strong angles and simple geometry.  The interior has been upgraded from time to time, but still feels fresh and inviting.  Taking the time and effort to make a place feel and function comfortably is worth the investment. 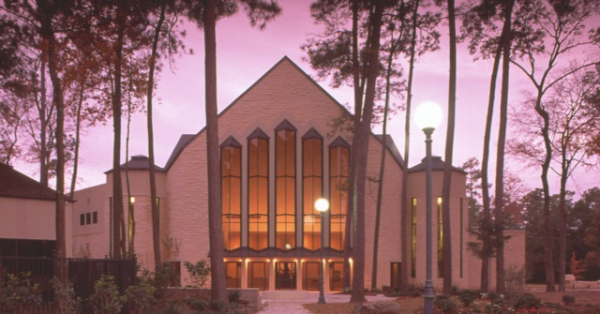