Like many Austin residents, I'm quite familiar with our city's alternative transportation system.  I cross the rails at MLK or Manor Road or 45th Street - often several times a day.  However, I'm always in my car.  But a full day of presentations at the Austin Convention Center provided the perfect opportunity to test the train.  I've posted my thougths on Austin's transit system in a previous blog and it was time for an update.  I decided to give MetroRail a ride.

The day before, I brought the car and parked in the Convention Center garage.  It isn't the nicest, and it's several blocks from the Center.  And I shelled out twelve bucks for my car to sit in a garage all day.  It was time to ride the train.


The closest station is at MLK, just west of Airport Blvd.  It was easy enough to pull up the schedule online.  The trains ran on roughly 30 minute intervals, and there were several I could take in order to arrive before the start of my first meeting at 8am.


I saw three options for getting to the train - I could take a 20-minute walk from the house.   This necessitated walking across Airport Blvd at rush hour; not a very desirable prospect.  I could have my wife drop me off on her regular commute.  But she leaves so early I'd have to take the first train and wait for an hour-plus once I got downtown.  I opted for a short drive to the station and hoped for some on-street parking nearby. 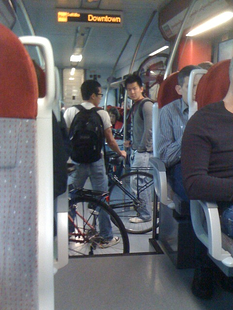 I left home with enough time to make the 7:14 train.  But I hadn't planned on the MLK and Airport Blvd intersection.  I got stuck at a long light with three lanes of car commuters coming in from the suburbs.  By the time I got through the intersection, I could see the crossing gates were down in front of us.  The train was arriving and I was stuck on the wrong side.  When the crossing gates rose, the train was pulling out of the station.


Oh well, at least I'd have plenty of time to find parking.  As it turns out, the adjacent streets offer a fair amount of free parking.  Perhaps these spaces will fill up in time, but for now, it looks like only a few people had the same idea.  I pulled behind two cars already parked at the curb.


I walked over to the platform, crossing the tracks as I did so.  The signage was pretty clear, I could see the 7:44 to Downtown was on time.  I picked up a flyer with information on the trains, and a printed schedule.  I looked for the ticket machine, but only saw one for validating tickets.  I don't know why you can't buy a ticket on the platform.  I finally located the machines back at the street.  So I re-crossed the rail tracks to get my ticket. 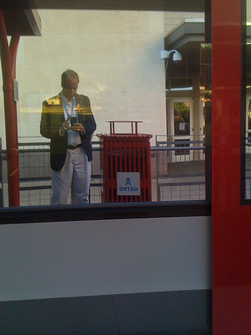 The ticket machine looked daunting, with lots of options on display.  But the screen said "Press any button to get started."  By following the prompts on the screen, the transaction was actually pretty simple.  All I needed was to insert my dollar and I had a ticket with a note that it was already validated.


The entire time I rode the train, I never saw anyone ask for or check for tickets.  I guess someone could jump on without a ticket and no one would ever know.


I still had ten minutes more to wait.  The platform was empty, but well-lit.  I sat on a comfortable chair and in no time, four or five more riders appeared on the platform, including a young man wheeling his bike.  A recorded voice announced the arrival of the downtown train and chiming bells warned us as the vehicle pulled up to the platform.


The MetroRail cars are impressive.  The interiors are clean, bright and inviting.  There were seats available, though several riders were standing, including several with bikes.  I settled into a very comfortable seat and enjoyed picture-window views of some very nice streetscapes of new buildings and older neighborhoods. 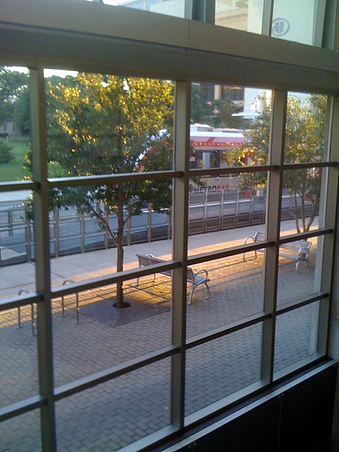 The downtown rail stop is adjacent to the Convention Center.  We arrived on time and I had plenty of time to get settled into my first session of the day.


The ride home was even more impressive.  The ticket machines downtown are closer to the platform.  The train arrived early so everyone on the platform took their seats in the comfortable cars while waiting for the 5:26 departure.


My best memory of the day was the view out the window within a minute of departure.  I was leaving downtown Austin during rush hour on a Friday afternoon.  As we crossed I-35, I could see complete gridlock.  All the cars in both directions on the highway were barely moving.  Looking towards 7th street, I could see that all the side streets were packed.  No one was leaving downtown quickly -- except us.  The train gained speed and whisked past the gridlocked cars.  The MetroRail, on Friday afternoon at least, trumped all other modes of transportation. 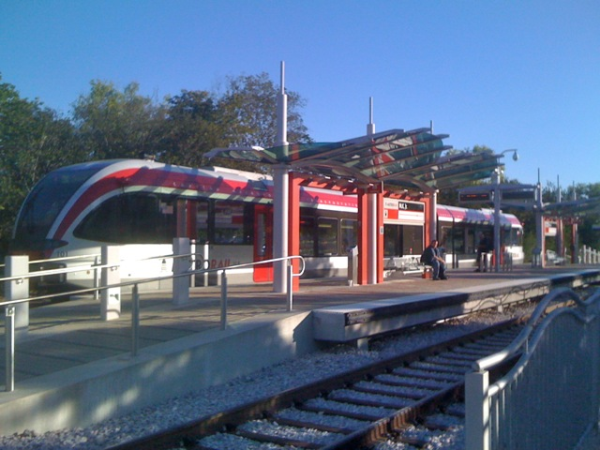