Conflict in the Church - Building, Money, and Stewardship

Money issues are complicated. It’s hard for a congregation to talk about money. It’s even harder to ask for it. You can expect any issues concerning building, money, and stewardship to produce conflict in the church.

While it’s safe to say that the majority of us would like to have more money, perhaps that is all we agree upon. For example, some people think of credit card debt as an acceptable way to get what you want or need right away, while others are very uncomfortable with any debt at all. Conflicts in church are inevitable when it comes to money and building projects. Some people will want the best of everything in the worship setting because that is a particular way of encountering God. Others will take the opposite view, saying that worship can happen anywhere, and that the poor should be taken care of instead. 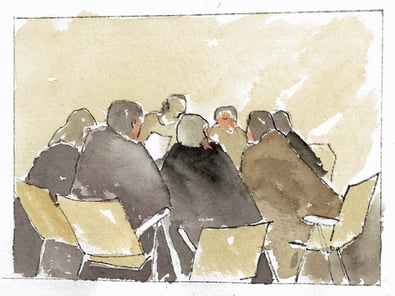 Far too often, money issues are a proxy for deeper question of what is valuable or important. For a worshipping community money is never an end goal. A church doesn’t exist to make a profit, but a church can’t exist if it doesn’t at least have some funding. Once you see money as a way to accomplish or facilitate a desired outcome, then you can focus attention on the end goal and what’s the best way to use money to achieve it.

It’s a good idea to get a sense of the attitudes your congregants have about money and debt before you enter into a capital campaign. You will no doubt need to raise money, and you most likely will take on debt. Giving people a chance to talk about this in preparation will help to lower any anxiety. Here are some perspectives on approaching money issues in advance of your building program:

Download the entire resource "Managing Church Change and Conflict" and let us know if we can help you on your next building project:

Guest blogger Laura Lincoln, an expert in managing church change, will be contributing a series of blogs over the next several weeks dealing with early issues of conflict in planning for a major building program.

Laura Lincoln, MA, MS is a theologian and organizational psychologist who has served as an intentional transitional minister, organizational development consultant, professor of Christian Worship, and campus minister. She has worked as a consultant for churches of various denominations in both the United States and England, is the former Executive Director of the Texas Conference of Churches, and the current Director of People and Organization at St. Theresa Catholic Church in Austin, Texas.