Recently, Ben Heimsath and Eric MacInerney visited A&M Professor Anat Geva’s Religion and Architecture class to discuss Hindu and Buddhist temple design. They began their presentation describing their approach to working with different religious traditions. Researching historical buildings, they explained, can be a good start. Ben and Eric stressed that it was even more important to understand theology and spiritual connections before attempting to design or envision a new place for worship. 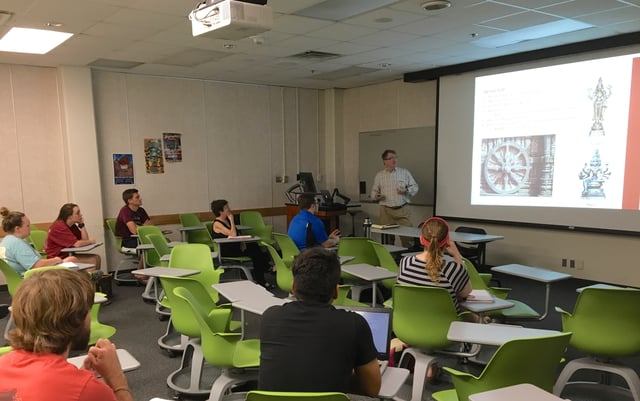 Eric reviewed some of the information garnered from his work on the Austin Hindu Temple. The Stapati, or temple architect from India, provided an overall layout and the firm’s job was to design the structure to accommodate intricate decorative elements.   Important connections were made between the human form and the layout of the building in both plan and section. Eric showed images of the on-going work of the Sthilpi as they are completing the traditional ornamentation on the temple.

Ben presented information and an initial design from the firm’s current work with the Thai Buddhist Temple, Wat Buddhananachat. His research included an analysis of the traditions and forms associated with Theravada Buddhism. The preliminary design was presented in a walkthrough format showing the placement of the congregation, the monks and the three statues within the central worship hall. 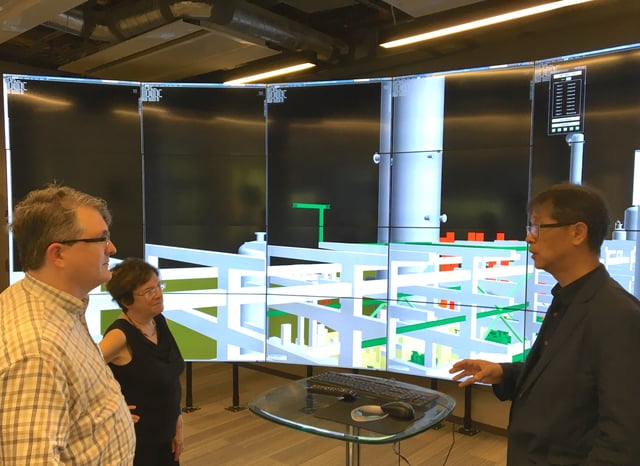 After the class, Professor Geva introduced Ben and Eric to Professor Julian Kang, a leading expert in BIM technology. They toured the recently renovated Department of Construction Science building and got a personal demonstration of the new BIM Cave installation where synchronized images allow for real size walkthrough visualizations.