If you live in Austin, you know the outcome of yesterday’s double-overtime game between the University of Texas and Notre Dame. But you may not know much about our vanquished opponent. The Fighting Irish are a perennial football powerhouse, but they also are one of the country’s premier academic universities. And since the school was founded by Holy Cross priests in 1842, it is widely considered an intellectual center of for theological studies. Over the years, the various traditions have become intertwined. One symbol on the campus, the massive mural widely known as “Touchdown Jesus,” pretty much sums up the school’s multiple legacies.

For more than 50 years, the image of Notre Dame football is actually the school’s major academic symbol. Touchdown Jesus is just the upper portion of a mural designed to honor academic and scholars. The mural is titled “Word of Life,” and was designed by one of the leading artists of the period. 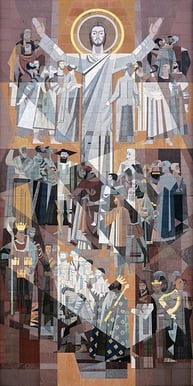 When the school commissioned what was to be at the time the largest academic library in the country, they needed an equally enormous image to go with it. The Hesburgh Library was planned to have a massive mural one of its multi-story facades. Artist Millard Sheets was at the height of an illustrious career having devised a series of murals for the National Insurance Company, beginning in 1953 with a modernist building on Wilshire Boulevard in Los Angeles. His design for Notre Dame was based on the image of a great processional with a never-ending line of great scholars, thinkers, and teachers throughout the ages. A benevolent Jesus with outstretched arms oversees the great procession.

But in a strange coincidence, the newly dedicated mural was on prime time television during the 1964 football season that saw the Fighting Irish undefeated until an upset loss to USC. That year, John Huarte became the sixth Notre Dame player to win the Heisman Trophy The upper portion of the mural was just visible behind the stands at the end zone. Even today, after a major expansion, the image of Jesus, with upturned arms looks down on the scoreboard. By the end of the season, the image of Touchdown Jesus was as well known as the school’s leprechaun mascot. 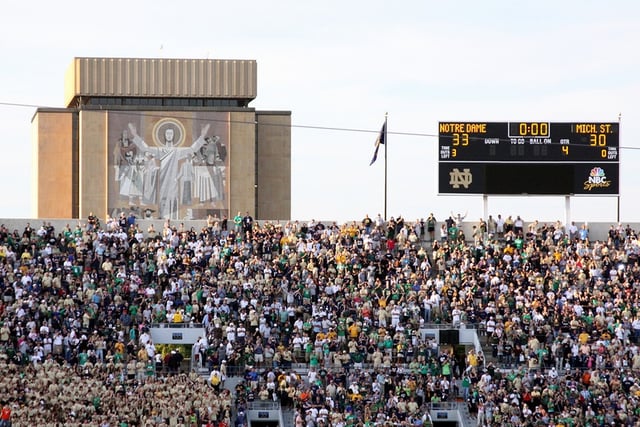 The Hesburgh Library is located on the campus of University of Notre Dame, Notre Dame, Indiana