A feature in Architectural Record about a new church in Korea offers a unique perspective on one major trend in church construction. Built by the Presbyterian Church of Korea, the program called for more of a community landmark than a church edifice. It’s located on a tight site in an established area of residential towers. The distinctive design uses seven stories of enclosed space, a meandering outdoor stair, and even a rooftop gathering space to maximize the number and variety of spaces available to congregations and community. 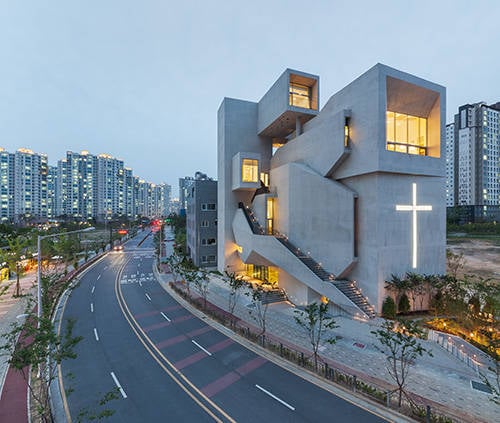 This image comes from the CNB News' architecture magazine, Space.

The Closest Church is located in an established and densely settled residential area in the city of Gimpo, near Seoul in South Korea. Like many expanding urban zones, the area, it appears, wasn’t planned to accommodate a church. So the small footprint and adjacent busy street required some creative organization of spaces. 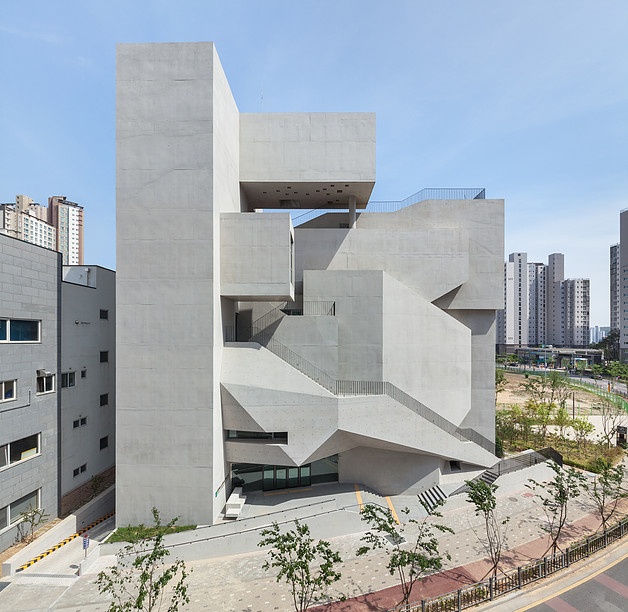 The building contains a main worship space, two chapels, a community meeting room, an open lobby, and offices. Though plans weren’t published in the feature, according to Record, the vertical arrangement of spaces was quite complex and fit like a 3-D jigsaw puzzle. A meandering outdoor stair connects major floors and also leads to a roof-top meeting space that can also be used for worship. 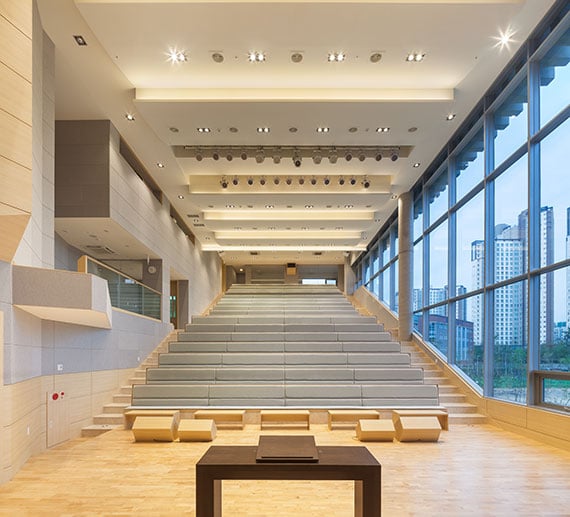 The architect, Kwak Heesoo of IDMM Architects is known for dramatic forms and daring use of exposed concrete. The design clearly succeeds and invites interaction from anyone driving by at high speeds, or simply walking into the lobby from the nearby residential towers. Except for a cut-out shape of a cross on one façade, there are otherwise no overt references to any specific religion. The thought was that residents in the surrounding community came from many religious backgrounds so the building shouldn’t offend or make anyone feel excluded. As Heesoo notes, his goal was to create a “harmonized place” without the “strong color of religion.”  Though I don't know any Korean, I've included this YouTube video becuase it shows overall building and some of the remarkable interior spaces.

The address in Space Magazine is listed as 1300-13, Unyan-dong, Gimpo-si, Gyeonggi-do, Korea