At the intersection of William Cannon and Cooper Ln. in South Austin are what appears to be two separate memorials. At one corner, a tripod with a wreath and flowers has been set up at the base of a tree. Across Cooper at the other corner, a utility pole is decorated with flowers and keepsakes. Though both use flowers, the look of these two installations is different enough to suggest they are two different roadside shrines. 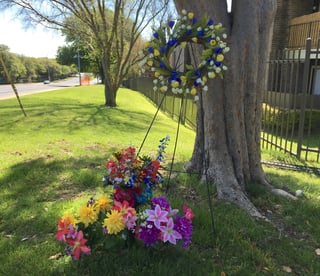 Since neither of them include any names, dates, or photos, one can only conjecture to whom the memorial is dedicated. A news report does indicate a drunk driver crashed his car at this location and his passenger, Lori Pollock, was pronounced dead at the scene. The crash took place in the early morning on February 14 of this year. The recent accident most likely prompted one of the two memorials, but which one? 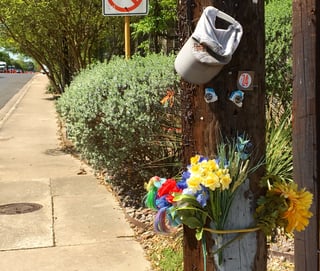 The pole installations offers tantalizing clues to its origin. The cap and a woven patch are from Lamar Street restaurant, the 24 Diner. Corona bottle caps are nailed to the post. Around the back, a My Little Pony figure is strapped on next to the flowers. Someone’s life and personality are on display here. It would be interesting to know more. 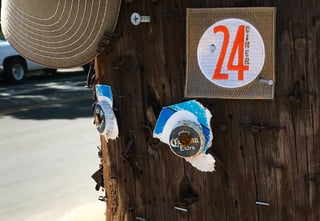 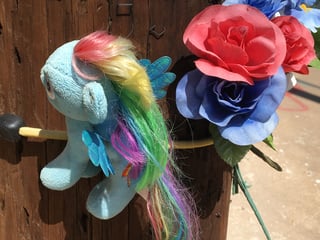