Airport Chapel Offers Repose - If You Can Find It

A few articles were published about the new chapel at Hobby Airport in Houston. Dedicated with the renovated lobby in 2011, it’s strategically located near the baggage claim. The intention from the outset was to allow access to anyone, with or without a ticket and on the public side of the security screening. I’ll blog about that chapel later. The articles didn’t say anything about the other chapel. In the 1990’s, deep in the utility areas supporting the gates, another chapel was dedicated. Just by accident, I found the that older chapel. 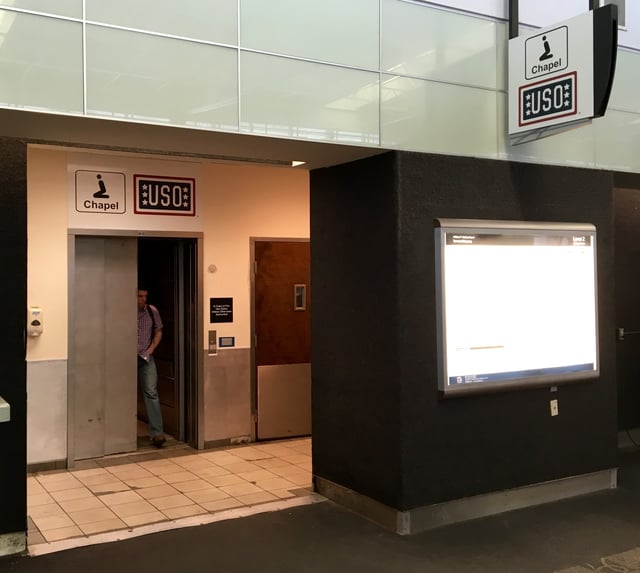 The kneeling icon next to the USO logo is the only marking for the chapel near a busy vendor area. I rounded the corner looking for a doorway or vestibule but it’s clear the facility was on a different floor. The light-filled concourse has a series of structures just visible above the shops and restaurants, so I imagined a chapel above. I imagined a place of light and serenity above the bustle of activities below. I stepped into the elevator and realized there was no upper floor. The chapel was down below. 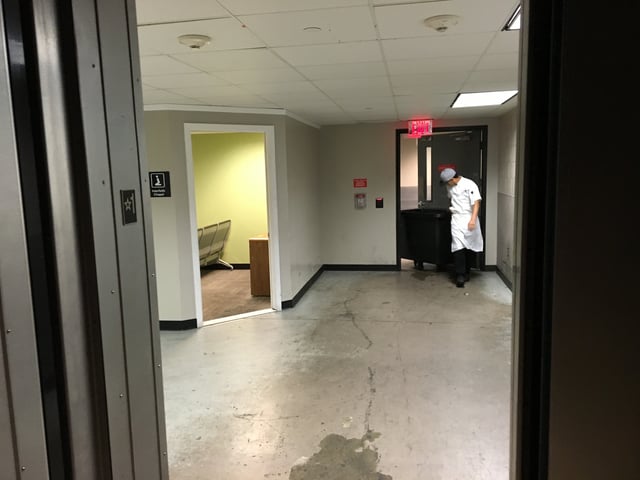 For a small basement chapel, they’ve done pretty well. The open door beacons from the open elevator door. The furnishings are borrowed, with seats clearly reused from the waiting areas above. The overall simplicity creates a welcome feeling. A spare counter at the back holds mostly Bibles with several in Spanish.   Prayer rugs, shawls and head coverings are tucked in on the lower shelves. There were two copies of the Koran, both in Arabic, no copies in English.

A colored pattered window is the focal point at the end wall. Not stained glass, however, the window pattern is colored plastic. But the wood surround gives an appropriate appearance overall.  The noise from the basement is a distraction. The clatter of rolling carts interrupts the silence at regular intervals.   I did notice that staff members appear to be very deferential to the chapel. Several loud conversations fell quiet when the staff noticed me in the chapel, 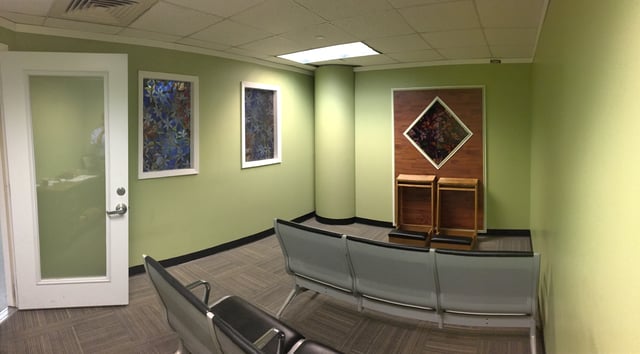 I often wonder whether spaces like this are important enough to warrant the effort. Though the airport relegated this location to the basement, someone or some group is tending to this modest space and making it welcome. The comments in the visitors’ book answered my question. Many visitors signed in and offered their thanks. Several comments expressed gratitude that a place like this existed. The last comment in the book summed it up pretty well: “It’s Remadan and you gave me a place to pray. Thank you!”