The first time I ever heard of a church being used for something other than worship actually came in a song. As a kid in the 1960’s, the folk song, “Alice’s Restaurant Masacree,” was all over the radio. Thanks to my older sisters, Arlo Guthrie’s album wound up in the family collection and I remember playing the entire song, several times over, sitting mesmerized through the nearly 20 minute musical, satirical, monologue. 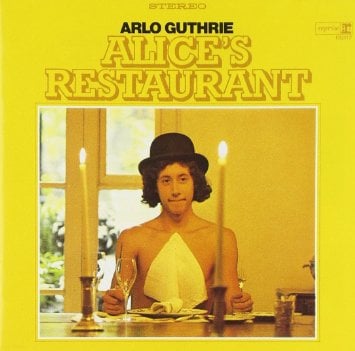 The song, a rambling story told first-person, starts when Arlo Guthrie describes a Thanksgiving visit to see Alice and her husband who live in an old church. 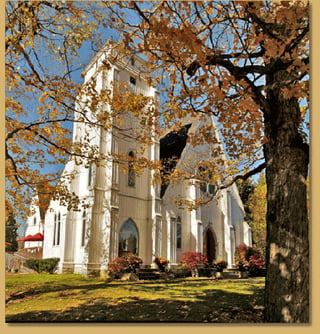 “…And livin' in the bell tower like that, they got a lot of room downstairs where the pews used to be in. Havin' all that room, seein' as how they took out all the pews, they decided that they didn't have to take out their garbage for a long time.” I still turn up my nose just thinking of an old nave full of garbage!

But, to help out, the singer and his friend decide to clean up all the garbage. The story wanders along with ironic asides and lots of twists and turns, and ultimately becomes a rousing, if somewhat nonsensical, anti-war anthem.   I listened to it recently from start to finish. The song definitely reflects its time, but there’s an impish humor to the tale, and the musical hook is almost impossible to forget. And then there’s that church. The one converted to a home, the one that, at least for Thanksgiving, got cleared of a bunch of old garbage. 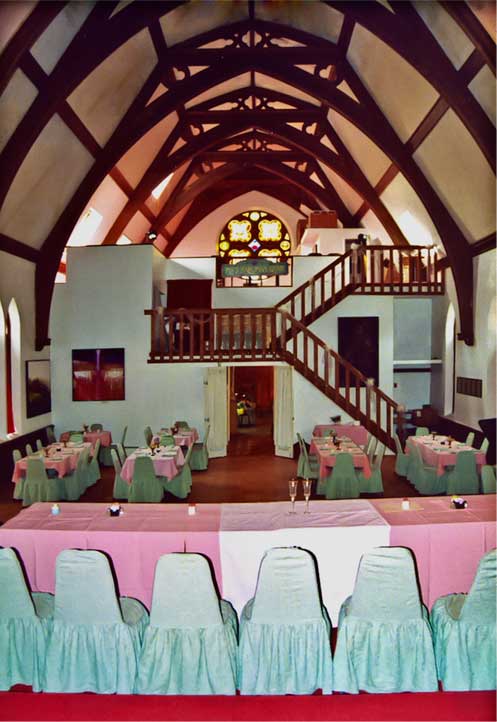 The Guthrie Center set for a wedding in the nave (where the garbage once was!)

It was well known at the time that the story, Alice and her husband, and even the church were real. Located in Great Barrington, Massachusetts, the original church dated from 1829. It was enlarged in 1866 when it became Trinity Church. By 1964, the church was sold to Alice and Ray Brock, an artist and architect who converted it to their home. After the song, and a later movie became hits, the Brocks sold the church, feeling hounded by curiosity seekers. After several other owners, in 1991, Arlo G 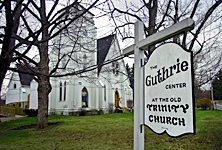 uthrie himself bought the property for his vision of a community gathering place and named it the Guthrie Center.

In yet another interesting twist, the Guthrie Center has once again become a place of worship. The Center’s website describes the many traditions represented for their rechristening ceremony. The Center is an interfaith foundation, whose mission is to bring individuals together for cultural, educational, and spiritual exchange. It’s a work in progress, as they have plenty of needs and raising money for the new roof. See the clip below just released last week.

Oh, and now that they have air-conditioning and heating, they are once again able to hold regular services.