The Smithsonian has opened the first major exhibit in the US of the Qur’an, Islam’s holy text. Featured on two floors of the Freer/Sackler Museum on the Mall in Washington DC, hundreds of texts display centuries of devotion and artistry. On loan from the Museum of Turkish and Islamic Arts in Istanbul, this is one of the greatest collections of ancient Qur’ans in the world. Many of these manuscripts were commissioned by royals or prominent individuals as a display of piety, power, and culture. Ranging in age from the late seventh century to the seventeenth century, the texts were treasured for their physical and spiritual beauty. Most of this collection was assembled by the leaders of the Ottoman Empire and were gifted to the newly established national museum early 1900’s. 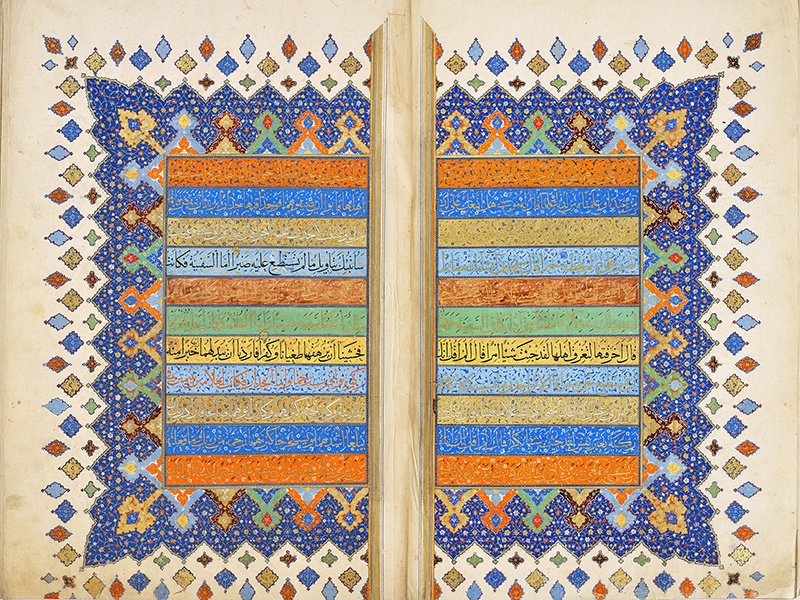 Notes from the museum’s website explain the importance of the Qur’an as a religious text:

The term Qur’an is derived from the verb qara’a, Arabic for “recitation” or “reading (aloud),” which underlines its fundamental nature as an oral tradition. According to Muslim belief, the Prophet Muhammad received the Word of God through the Archangel Gabriel beginning in the year 610. Few of the revelations were transcribed during Muhammad’s lifetime, but within a few decades of his death in 632, the Prophet’s followers transformed the Qur’an from orally transmitted words into a fixed written text.

Scribes and copyists were then faced with the challenge of lending visual form to the meaning and content of the Word of God. The result was the birth and subsequent development of Arabic calligraphy—beautiful writing. As Islam discourages figural imagery within a religious context, variations of abstract, geometric, and vegetal designs became the main form of decoration.

Ten years earlier, the museum hosted a similar exhibit on the origins of the Bible. This presentation from Julian Raby, the Freer/Sackler Director explains the importance of this exhibit as a continuation of the gallery’s exploration of artistry and faith.