A morning stroll near the Capitol in Tallahassee revealed something unusual. Through the entry gate of Burnett Park, just far enough from the busy traffic on Gaines Street is a simple structure made with chalkboards. In big white lettering the title of this public art installation reads, “Before I die…” On the side is the subtitle: “Tallahassee’s Bucket List.” It turns out that for at least the past three years, Tallahassee has been part of a global movement that now includes 70 countries with over 1,000 Before I Die walls. 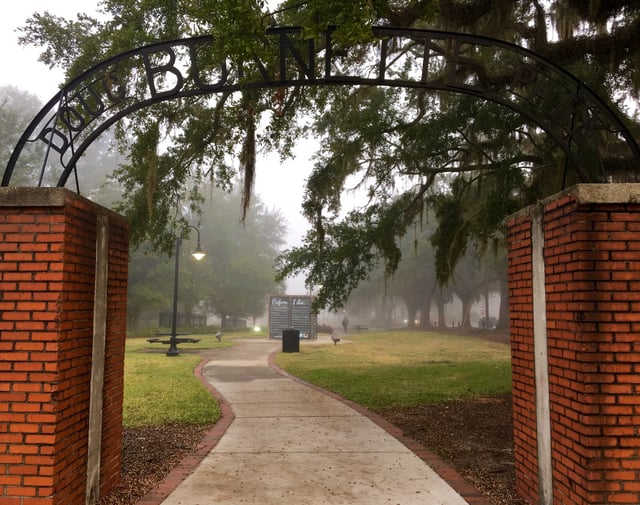 There’s plenty of information on-line about the work. The Tallahassee project was initiated by high school students. What appears to be an earlier project made by students at Rickards High School made several temporary stops in and around the FSU campus. The idea for a permanent wall in Burnett Park came from high school students Eva Rosenzweig and Rachel Joyner. They persuaded someone with a camera to document their crew during construction. The creation is now memorialized on the Before I Die - Tally Facebook Page.

This project all started when New Orleans artist, Candy Chang lost a dear friend, causing her to plunge into a sudden and deep period of grieving. Passing an abandoned building in her neighborhood, she realized its potential as a place where she and her neighbors could share deeply personal thoughts. With permission from the owners, and a group of friends to help, they transformed the wall into a fill-in-the-blank chalkboard. Each line begins with the prompt: “Before I die _______.” Overnight the wall was filled with responses. Candy Chang’s 2012 TED talk offers some interesting insights into a project that has grown into a global movement.

Tallahassee’s Before I Die wall may be reaching the end of its tenure. Its Facebook page has no new posts after 2014. The wall in Burnett Park looks as though it was overdue for a cleaning. I was disappointed to see some rude comments scrawled over some of the panels, though honestly, I expected much worse. I’m posting selective photos since the majority of the messages took the program to heart and shared meaningful thoughts. 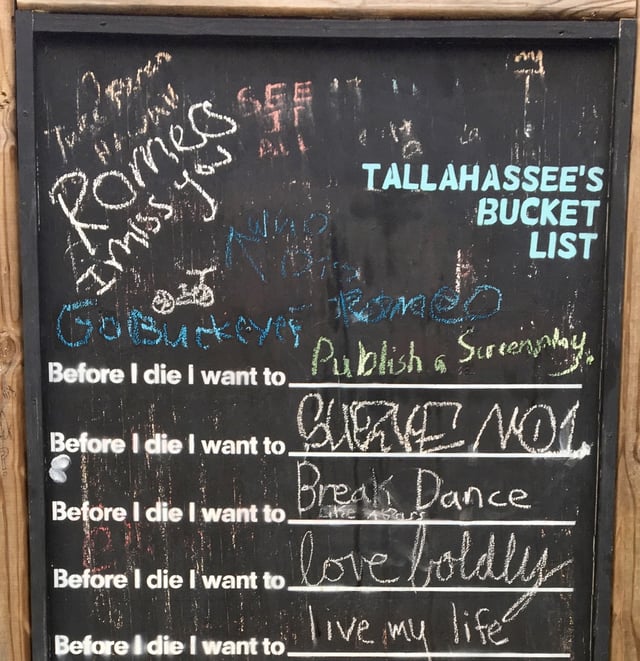 From this limited sampling, it did appear that responses fell into several catagories. There were a number of responses about travel. Tallahasseans seem to be interested in other regions of the US, with Portland, Montana, Hawaii, and Alaska all getting a nod. One person wanted to climb Mount Everest and several wished to go to the Olympics. A number of aspiring performers added their dreams. One wanted to start a band, another wished to learn to play drums. Another wished to be on Broadway.

A large number of responses had to do with personal journeys. Several wished to live good lives or accomplish something meaningful. Others noted desire for love or relationship. Two blanks, one after the other, seem to have come from the same author. The first response: “…fall in love.” The next response: “…be a Dad.”

Before I Die - Tallahassee is in Burnett Park, near the intersection of S. Boulevard St. and W Gaines St., Tallahassee, Florida