X Games Halfpipe: Sacred Space in the Most Unlikely Place

It’s flashy, trendy, and loud.  A location perfectly suited to the hipster athletes as they show off their adrenaline-fueled, high-flying flips and spins.  The X Games halfpipe would be one of the last places I would think of as a sacred environment.  Yet this exacting ice course was transformed for a brief moment into a singularly beautiful place in tribute to one of the sports fallen heroes. 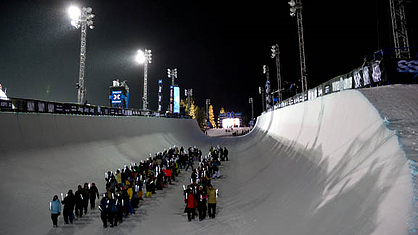 Tonight’s broadcast of the Winter Olympics included an emotional segment honoring the life and accomplishments of Sarah Burke, one of the games most celebrated figures who died from injuries sustained in a training accident in 2012.  NBC’s coverage showed clips from the ceremony held at the halfpipe in Aspen a week after Burke’s death.

The ritual was simple, elegant and deeply moving.  Two years had passed, yet the Burke family mentioned this ceremony during their interview.  “It was like a Cathedral,” her mother said proudly.

And it was like a cathedral.  I tracked down the ESPN video posted after the ceremony.  The camera captures the start of the ceremony with the image of the fully illuminated, yet empty halfpipe at night.  One by one the flood lamps are turned off.  Snow boarders and skiers line up at the top of the pipe, each one holding a glowing lamp.  The athletes descend the halfpipe slowly in rows, evoking an image of a stately procession in a classic basilica.  With no sound but the crunching of snow, the camera catches the drama as the crowd at the bottom receives the sliding procession with deep hugs and bursts into spontaneous applause

I was so impressed with this event and the amazing, completely unexpected creation of sacred space.  It reminds me again that the places we humans associate with the sacred can’t be defined by simple formulas.

There were, however, important elements that contributed greatly to the impact of this ceremony.  Certainly, the long axial space lent itself to the ceremonial procession.  The use of light, in the simple, elemental form of the long light tubes evoked the image of ceremonial candles.

But most of all, this space was transformed by the athletes themselves.  During the ever so brief ceremony, their aspect seemed to be otherworldly.  These young, live-for-the-moment kids became the robed monks, the knowing sages, the priests in a timeless ritual; a community expressing a shared grief, and a celebration of life.

Here’s a link to the ESPN coverage of the tribute.  Don't you agree this is a perfect example of “Suddenly Sacred?”