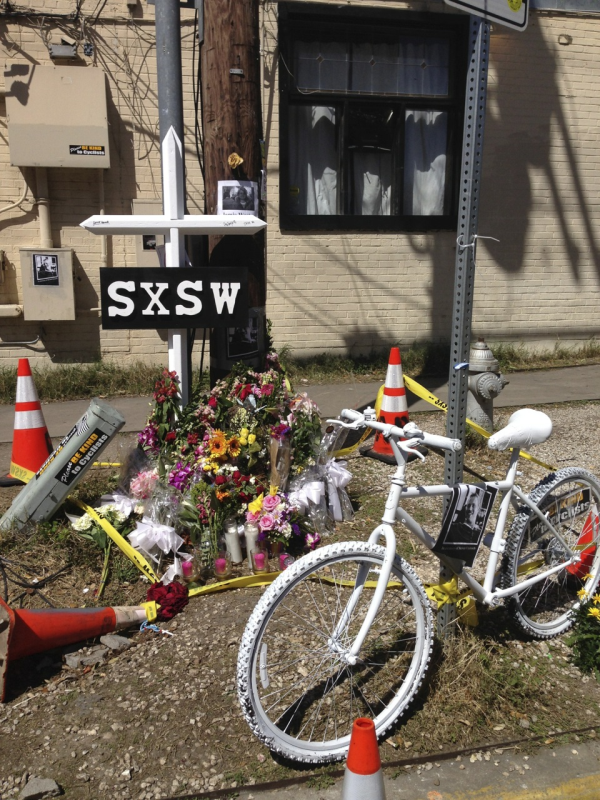 The Mohawk, an indie downtown club, would not be included on anyone's list of sacred places in Austin.  Yet I pulled up in front of the venue certain I’d find some memorial or memento to mark the tragic event at this year’s SXSW music festival.  As I suspected, there on the curb was the improvisational shrine that marked this place as suddenly sacred.

In the early hours last Thursday, a drunk driver, trying to evade police, plowed through a barricade and into the crowd of SXSW revelers outside of the Mohawk bar.  Dozens were seriously injured, two were killed at the scene, and two more died of thier injuries several days later.  Witnesses describe the horror of the aftermath, with so many hurt, and startling amounts of blood.

I made my pilgrimage during lunch hour.  All the wreckage and all the blood were gone, and the street was nearly deserted.  That didn’t surprise me.  Businesses on this stretch of Red River are generally closed during the day.  At night, however, it’s a different scene.  The Mohawk is on the corner of 10th Street, and Stubbs on the opposite corner at 8th Street.  With several bars and music venues between, this is a regular party place on any given evening. 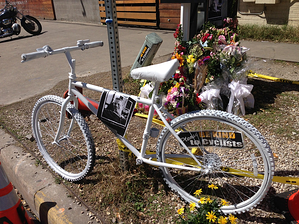 A white bike and a white cross were the most visible items marking the shrine.  Orange cones and yellow police tape looked like they had been appropriated from crime scene investigators.  Flowers and candles filled out the grassy area.  The assemblage was a jumble.  There was an improvisational look to the collection.  It’s still the front door of a bar, but people were moved to leave these items, and to mark this suddenly sacred site.

True to the music scene, Xerox paper notes and pictures were taped up in various places.  Images of Steven Craenmehr, who was visiting from the Netherlands and Jamie West, a native of Austin, were ducktaped in several locations, just the way band notices usually dot these walls.  I didn’t see a picture of the third victim, Sandy Le, but she had just died the day before. An image of the fourth was also missing, as they were still in the hospital and had not yet left this world.  The white ghost bike strapped to the traffic sign offered a grim perspective.  Steven Craenmehr was riding a bike when he was struck and killed.  Jamie and her husband were riding a moped. Later on, DeAndre Tatum would also pass on from injuries sustained in the crash.