It has been more than twenty years since the Treaty Oak garnered global attention.  It became an instant sacred site, a focus of prayer and vigil due to tragic circumstances that came to embody the zietgeist of the moment.  The once grand tree had been deliberately poisoned.  The world was on death-watch as a heroic team struggled to stave off its near certain demise. 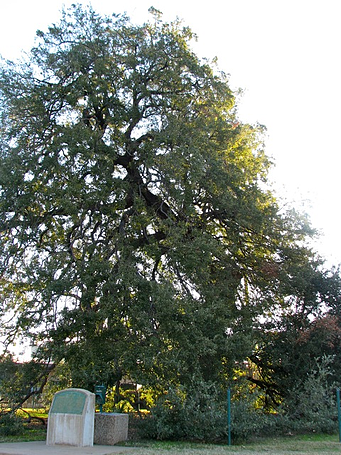 The Treaty Oak was one of the big media stories in 1989.  Concern for the  tree produced a near constant vigil of news cameras and well-wishers alike.  The Treaty Oak was saved, ultimately, though in a severely damaged condition.  Today, about a third of its majestic canopy remains.

The story had all the necessary elements of high drama.  First, the mystery; who would try to kill a 500 year old tree?  How could anyone do such a thing?  In no time, a satisfying cast of characters emerged, and the media was hooked.

The villain, Paul Cullen, was quickly nabbed .  Hubris was his undoing.  He bragged about poisoning the tree as some kind of ritual to get a girl to notice him.  His horrified friends turned him in.  Cullen got a seven-year sentence and he didn't get the girl.

Ross Perot, the larger than life Texas businessman, became the concerned benefactor.  He proudly presented a blank check to save the tree.

The City of Austin's urban forester, John Geidraitis, became an unassuming hero.  He adroitly took on the role of an international spokesperson, issuing updates on the intense efforts to counteract the herbicide, Velpar.

As this drama played out in the media world, a far more moving drama began in the real world, on the Treaty Oak site.  All sorts of people appeared at the tree.  They came to pray, to gawk or to quietly watch as the make-shift tubing pumped nutrients into the tree's branches.

And they left messages.  Notes and cards and written encouragements of all kinds.  The parks department strung up chords from which to hang them.  The cards and watchers continued for days and days.  Gradually, the tree's preservation was assured, in spite of several pre-mature eulogies.

The quiet tones, the hushed reverence shown by nearly every visitor indicated the extent the connection had been made.  This place was understood to be sacred.  A place like many I consider "Suddenly Sacred."