The IRS Plane Crash Building - Why Isn't This a Sacred Site?

What makes a particular place sacred?  I am just as intrigued by a place that should be the focus of veneration or prayer -- but isn't.  Shouldn't an obvious location be marked or identified?
I've driven past the Austin IRS building plane crash site a number of times. I've stopped to photograph and study many sites that commemorate inexplicable events.  This one had all the elements, I thought, to move someone to create some kind of memorial.  Why isn't this a sacred site?

On the morning of February 18, 2010, a single engine plane slammed into an office building on Hwy 183 in Austin.  The Echelon 1, was a seven-story structure that housed the IRS as a major tenant.  Fire scorched the face of the building as people scrambled to evacuate.  Rescuers were swift to respond, and miraculously, only one person was killed, a senior employee, Vernon Hunter.
The news quickly focused on the pilot, an IRS-hater whose ranting suicide note assured the public he had acted alone.  Sadly, Joseph Stack torched his house before he set off on his fatal flight.  He left a wife, and her daughter from a previous marriage homeless and shaken. 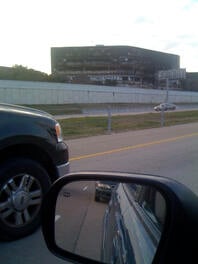 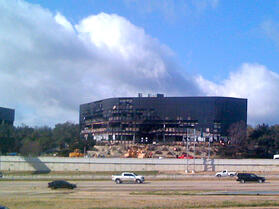 I took these photos just a few days after the event.  With so many emergency vehicles surrounding the building, the only place to get a decent view was across the highway.  I parked at the far end of the lot and walked along an embankment to find the best vantage point.  There were several groups of people who were also looking across the highway.  I noticed that the long sidewalk didn't offer any special place or point from which to view the ruins of the Echelon building.  If a suddenly sacred site were to come from this tragedy, I assumed it would have to be at the building itself. 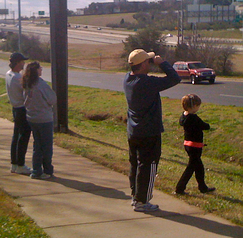 A year after the plane crash, I visited the Echelon site.  It looked like any other construction site.  How could this be?  Where were the flowers?  Where were the shrines?  Have we demonized our government so much that we have no sympathy for its representatives?  No, the vigils for Gabrielle Giffords in Arizona and Washington prove our empathy completely trumps our politics in the face of tragedy. 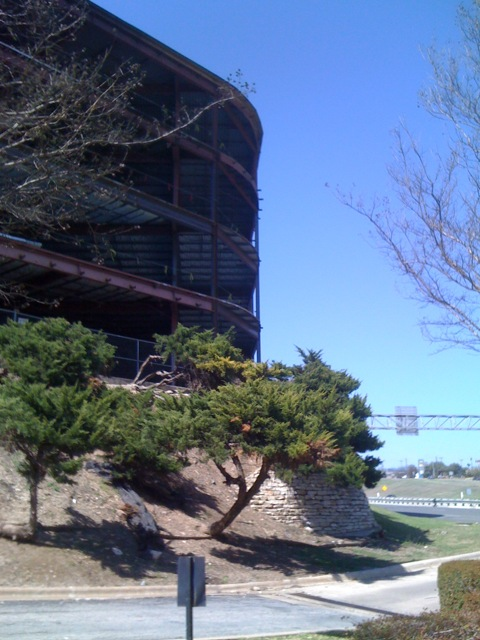 The site isn't very accessible.  The impact area is above a steep slope.  There's a narrow entry drive off the access road and not much of a place to stop or park nearby.  Currently, the building is fenced off as the structural repairs are underway, the first phase of a complete renovation of the building.  The adjacent buildings are still occupied with corporate clients.  The parking lot was full, and it was pretty clear that loitering around the property wouldn't be tolerated for long. 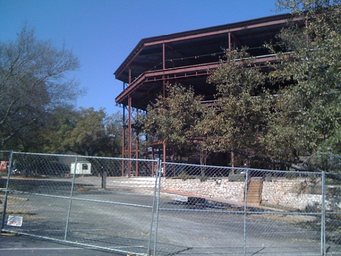 Without stopping to get out of the car, I drove around the site slowly.  Surely there was a way that someone would acknowledge this was a special place.  And then I looked at the sign by the construction gate.  It was an official notice restricting access to the property, but someone made the gesture I knew had to be there.  An American flag was slipped into the fence, right above the sign. 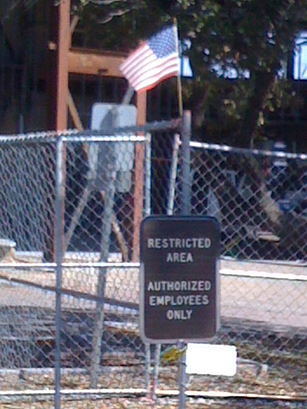 No, it's not a place to stop and contemplate.  This place is a corporate business park, not really a prayerful environment.  The steep slopes and limited access are very real impediments to marking this as a holy place.  But it was marked.  I found what I was looking for.
The flag speaks to any visitor, whether a construction worker, or a sight-seer like me.  Someone wants us to know that this place is important.