The Stations of the Cross Project

Guest blogger, Maryann Heimsath worked with a team of students over two decades ago to create a powerful, yet simple Lenten activity.

THE STATIONS OF THE CROSS PROJECT

For many years I worked with a group of students at the University Catholic Center here in Austin to create materials in support of the many activities throughout the liturgical year. We were working with no budget in a cramped cinder-block building not known for the aesthetic of its auditorium space. 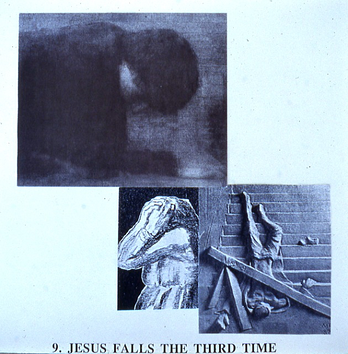 The group met just after Ash Wednesday, 1990, to plan projects for the Lenten season.  We realized the Catholic Center had no Stations of the Cross, and no budget to buy any.  We had been making other the liturgical embellishments with paper, ribbons, fabric and candles, so we asked ourselves: "Why not make our Stations the same way?"

Sister Margaret Andre, the staff member of our group, supplied articles and books about the devotions related to the Stations of the Cross.  Each of the fourteen the Stations depict specific events along Christ's walk to Calvary.  Traditionally, these scenes are rendered with the clothing and scenery of ancient Jerusalem.  We felt the stations could be more meaningful if their images reflected issues of today. I sent the students back to their dorms to study the materials from Sister Margaret and collect images from current magazines.

At the next meeting I brought 15 12" x 12" foam core boards, scissors and glue. The students brought a wealth of paper cut outs and started to work on the fourteen images.  We agreed to add the fifteenth panel, which is often included as a depiction of the risen Christ. 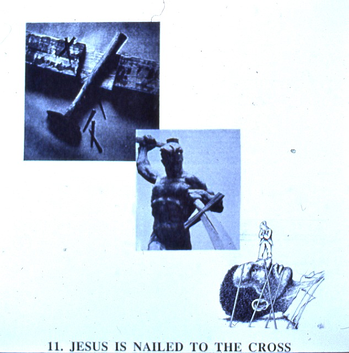 The title for each scene was included using a simple typeface.  But the collage of images on each of the finished stations more than adequately told the story.  Each one powerfully expressed the theme for the Station using very current photos and images of artwork. 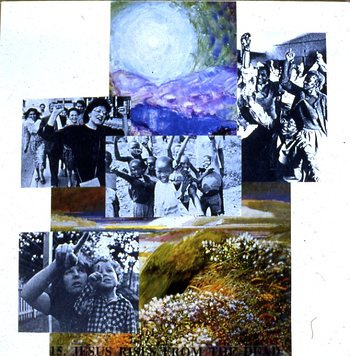 This was a creative and spiritual experience for all of us.  When Lent was over before we put the stations away I photographed them and stored the slides. Twenty one years later I found the slides tucked in with projects from the time.  With the help of a computer program I would never have thought of using in 1990, I have made these images into a collection of prints.  Scaled down to much smaller squares, they have made a special pocket-sized Stations of the Cross. 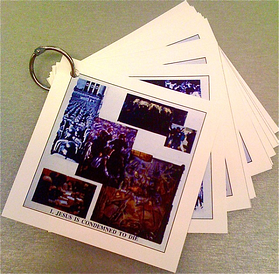 Just like the Suddenly Sacred sites documented in other posts, these pieces show naïve, yet completely successful ways of expressing spirituality.  Any viewer can relate to these images, whether or not they are Catholic, or even aware of the traditions associated with the Stations of the Cross.