A Touch of the Sacred in "Art In The Streets" 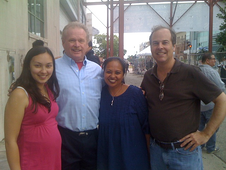 We were in LA recently for a visit, and our daughter suggested we see the new exhibit at the Museum of Contemporary Art.  We invited an old friend, Fr. Paul Rospond who recently moved back to California.  We met Fr. Paul waiting in line to get in.  "So, we're actually going to pay money to see a bunch of graffiti?" he asked.

"Art in the Streets" is billed as the first major street art and graffiti exhibition in the U.S.  The curators made a considerable effort to be comprehensive.  I was actually quite pleased to see the emphasis on the many expressions and artful renditions in public places.  Shepherd Fairy's "Obama" was probably the most notable image in the exhibit. 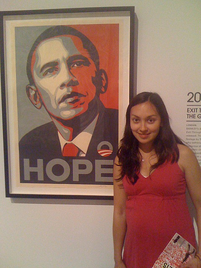 Fortunately, the graffiti of gang tags, or marks made just to deface property was barely noted here.  As for the history, I saw some of the artists I remembered from my college days in New York.  Keith Haring was one of the first to "take back" the black blanks left when subway advertising was changed out.  His outline people and their social commentary became legendary.

Like many installations I have noted in this blog, the street artists are most successful when they call attention to places that are overlooked or commonplace.  At their best, these works challenge us to take a new or closer look.  Most of the street artists paint images, words or symbols on found surfaces.  But others are like the suddenly sacred authors, using materials, or a collection of objects to make their point. 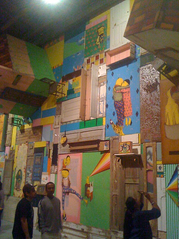 Nearly half the exhibit consisted of commissioned installations from some of today's leading street artists.  And that is where the art really got interesting.  There were a number of space invaders in characteristically unusual places.  One of San Paolo's recognizable street artists created a dizzying wall of doors. 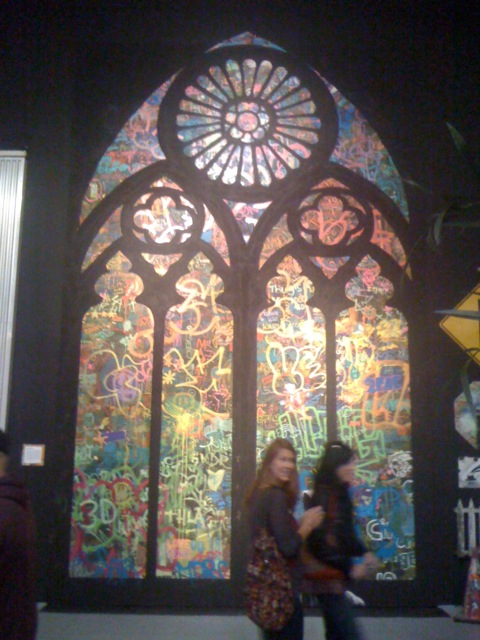 It was Banksy's signature piece that brought it all together for me by adding a touch of the sacred.  Evidently, he conducted a workshop of young artists each of whom added layer upon layer of wall painting.  At the very end, Banksy superimposed an iconic frame of a gothic window.  The final touch is a hooded kid with a bucket of paint by his side - and kneeling in prayer. 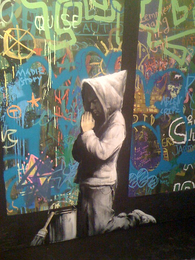