A visit to Arkansas recently brought me in contact with the work of the late and celebrated architect Fay Jones.  Influenced by his early association with Frank Lloyd Wright, Jones developed a deeply personal and often spiritual expression with his buildings.  His best-known work, the Thornecrown Chapel, is ranked among the most admired buildings in America.

But Jones' less known work is equally intriguing.  Browsing through an amazingly comprehensive on-line list of his projects, I noticed that his "Peace Tower" was located on the University of Arkansas campus, an easy stop on my way to the airport.

The tower is located at the center of the campus, between the main administration building and the architecture school.  I walked up the ceremonial lawn examining the old academic buildings.  I wondered whether Jones had superimposed some kind of dazzling modernist statement as a contrast to these generic structures. 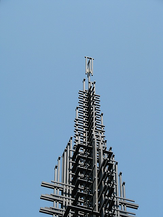 I should have known better.  The peace tower is a quiet, restrained composition.  The first image looks like a thin line of steel peeking through the tree tops.  The tower is actually an elaborate assemblage of small pieces of metal shimmering against the sky and growing up to a gradual point.  The steel rises up from a continuous flow of rushing water at the center of a rustic stone fountain.

But I was more intrigued by the fountain and the base.  The gently domed form looked exactly like a Stupa; a sacred structure well-known to eastern religions. Its origins come from the directives of the Buda who requested his body be placed in a mound at the major intersection in a busy city.  Stupas are more than burial mounds.  These structures are deeply symbolic with references to the cosmos.  Devotees pray and meditate as they circumambulate the structures. 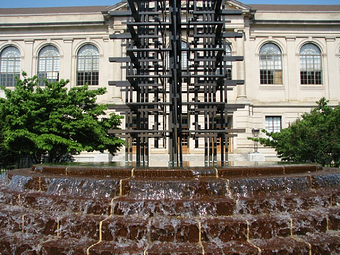 The base of the tower is obviously a conscious reference.  The location is a busy center of campus.  The blocks of stone, the landscaping, the flowing water have a calming effect and invite reflection.  The path around the fountain is a circle, just like a Stupa. 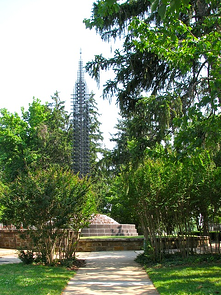 Jones worked hard to suggest contemplation to busy college students.  It appears, however, to be working.  The stones at the base are perfect for sitting.  A strip of lawn may even invite someone to lay down and reflect.  It may even be a bit too inviting.  The fountain at the center does have a small sign respectfully requesting visitors to keep out of the water!