On the second anniversary of the Boston Marathon bombing in 2015, a call went out for some permanent way to memorialize those who were killed in that horrific event. As far as I can tell, there are still no official plans for the completion of a memorial or monument. It is interesting to note that a memorial has been installed for Sean Collier, the MIT policeman who was shot and killed by the assailants three days after the bombing. I’ll post about that visit later. 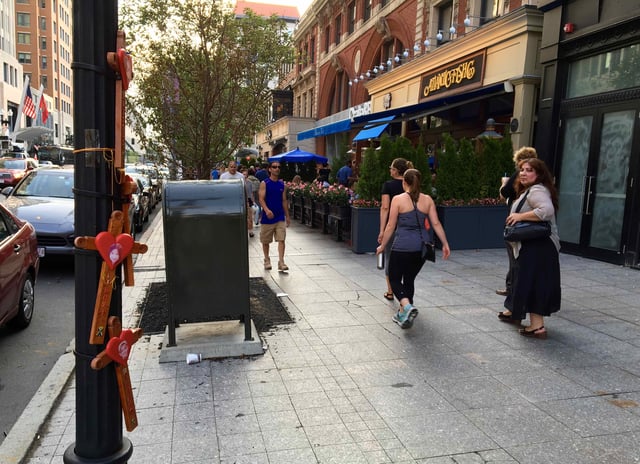 Researching the marathon bombing and the subsequent outpouring of support and prayers for the victims, clearly all the spontaneous memorials are now gone. From what I could tell, there is still one lamppost near the site of the bombing where a modest installation in recognition of the deceased remains in place. 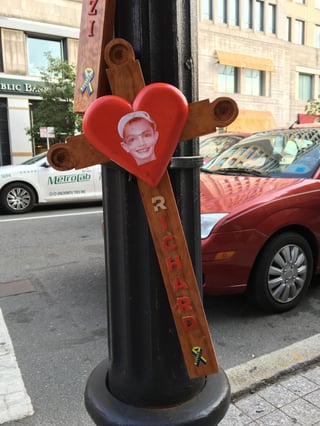 Today, Boylston Street shows almost no signs of the past tragedy. High-end shops, restaurants and bars line the broad sidewalk across from the convention center. Since I was on the lookout for a special lamppost, it didn’t take me long to locate the memorial. Four wooden crosses have been fixed to the post. A bright red heart with the face of each of the deceased is attached at the center of each one. 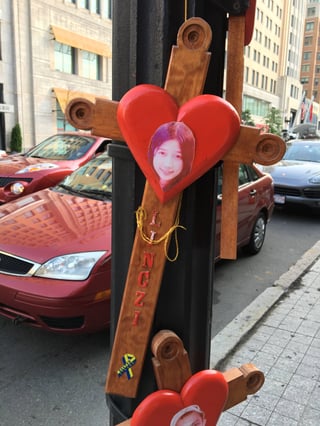 The memorial doesn’t distinguish between the three who were killed by the bombs at or near this site, eight year old Martin Richard, Chinese exchange student Lingzi Lu, restaurant manager Krystle Campbell, and Sean Collier, the MIT policeman. All four are recognized with the same, hand hewn wooden crosses. The photos are just the faces, the portraits published over and over in the days and weeks after the senseless killings.

As I stood by this provisional shrine, one or two people glanced at the crosses. But most people hurried by with little notice. It’s not that there’s no interest. Boston has thoroughly embraced the spirit of unity that brought an entire city together after the tragedy. “Boston Strong,” still resonates. A highway overpass by Boston University not far away is painted with the slogan. And Boston certainly has its memorials, there are dozens and dozens of them all over town. I’m sure sometime soon a permanent marker will be dedicated on or near this location, and I’ll be looking for it. 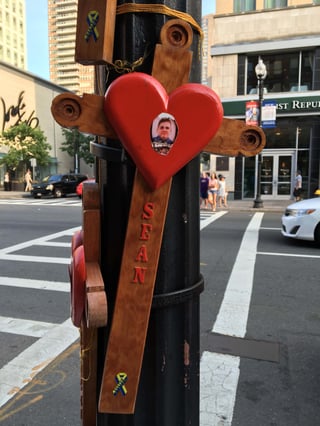