Boston Women’s Memorial on the Mall

While Boston firefighters were completing the Vendome Fire Memorial, another group was just beginning to plan for a long awaited memorial commemorating Boston leaders who until recently were overlooked. They’ve been overlooked, largely because they are women. Yet these women, each in their own way, had a significant impact on their times. The Boston Women’s Commission, with the help of the mayor’s wife, Angela Menino commissioned artist Meredith Bergmann to find an appropriate way to celebrate these overlooked heroes.

The design concept is actually pretty elegant. Historically monuments include likenesses of individuals raised on pedestals. These women are historic characters, but the monument also needed to be modern. So there’s a pedestal for each of three women, only none of them are on top of it. Instead, each bronze figure is in someway using the big granite block to further their work. And the women are all posed to invite interaction with visitors. 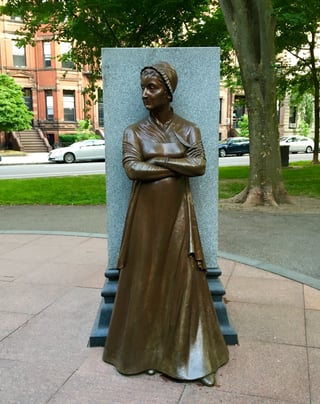 Abigail Adams, probably the most recognized of the trio, was the wife of the John Adams, and the mother of John Quincy Adams. Her letters and correspondence have been widely read and reveal much about the early leadership as the American colonies sought independence and of the early years of the Republic. 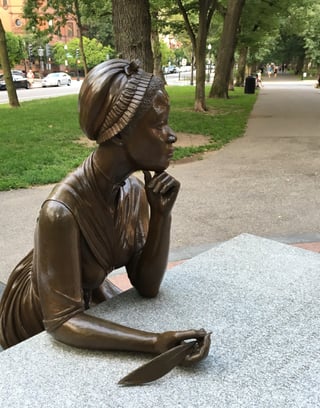 Poet Phillis Wheatly was the first female African writer to be published in America. Though kidnapped and sold into slavery at seven, she eventually became a literary prodigy and wrote of both her condition in slavery and the conditions of liberty and justice. 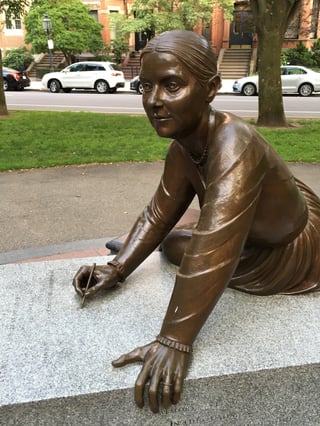 A leading abolitionist and suffragette, Lucy Stone was one of the first women in Massachusetts to graduate from college. She started the influential magazine, the Woman’s Journal and wrote and spoke forcefully for women’s rights.

The women’s memorial really invites interaction and further research and discussion. When I visited recently, several children were sitting on the stones, playing as though they were conversing with these historic women. The best explanation for the memorial’s engaging presence may be a quote from the artist’s statement on her webpage:

“I give myself assignments or I take commissions to find challenges to make heroic work in which the themes must be expressed with beauty and with irony.”

The Boston Women’s Memorial is located on the Commonwealth Avenue Mall is between between Gloucester St. and Fairfield St., Boston, Massachusetts