A massive outpouring of grief from the recent death of David Bowie was pretty amazing, and somewhat unexpected. Though there was no surprise that the announcement produced a string of spontaneous memorials in various locations. A particularly inventive tribute was discovered in downtown Austin when Bowie St was renamed by renegade marketing folks. 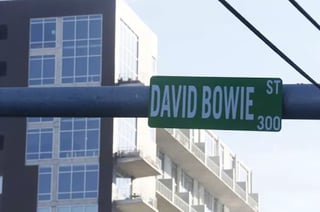 I hadn’t thought much about a similar outpouring in the virtual world. Megan Garber’s recent Atlantic article notes the huge controversy online regarding what is and is not appropriate expressions of grief. Her article “Enter the Grief Police,” notes the number of people who insist that grieving, if legitimate, should be a solitary or individual act.

Garber’s interesting rebuttal suggests that the internet is actually returning us to an earlier social phenomenon when grief was a community activity. Certainly, there are a few who use their social media posts for self promotion, but the number and sincerity of genuine expressions of grief are serving an important purpose to bring people together in a time of need. Someone who meant a lot to lots of people can and should be grieved collectively. Garber’s interview on the CBC's broadcast "Q" make a compelling case that all the online chatter is simply an age-old expression of communal grief.