First flowers and messages, some chalked on the sidewalk, and soon candles made an impromptu assemblage. In the heart of Brussels, this makeshift memorial followed the pattern of what has by now become a predictable presence after a traumatic event. But apparently the focus of this spontaneous public shrine began to take on its own flavor and symbolism. Soon flags were added; flags from all countries. Messages of unity and of peace offered a stark contrast to the violence espoused by the terrorists. Even the location was uniquely symbolic. The bombings, according to reports, weren’t actually at this location. This public shrine has grown at the Place de la Bourse an open square in front of the Brussels stock exchange. Since the bombings, hundreds of people come daily to add to the shrine, to pray, or to quietly mourn.

In a post for the on-line news site, Bustle, Alex Gladu suggests the Brussels shrine offers additional symbolism due to its connection to the European union. With the creation of the EU, the exchanged merged with exchanges in other countries to create a unified trading system. The system is now connected with the NY Stock Exchange and other global markets. While I agree with the conclusion, I find it interesting that the institution’s association with global unity and cooperation has overshadowed the common gripe about global financial markets as out of touch or hostile to the needs of local communities. 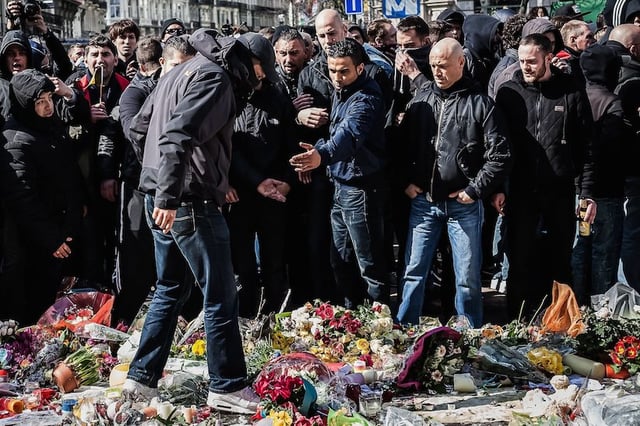 Sadly, a new symbolic association has been thrust upon this place of public grieving. Sunday, an organized group of right-wing hooligans took over the steps, yelling anti-Arab slogans and spouting violent rhetoric. Some literally stomped on the flowers, flags and written notes. This was a gesture of contempt for the overwhelming show of solidarity demonstrated by a daily stream of mourners. A few of the mourners shouted back, but most heeded the police and ignored the taunts. Within a short time, the police formed ranks and pressed the agitators out of the square. And so the news cycle now adds images of confrontation at this symbolic location. Beyond the flags and flowers, the site’s meaning now includes a reminder that it takes vigilance and effort to counter extremists on all sides.