As many of us enjoy the long Memorial Day weekend, it seems appropriate to focus on aspects of faith in the military. One very interesting subject is the history of the chaplain insignia. From the veterans I’ve known over the years, military insignia function like a specialized language for anyone who serves or has served in the armed forces. Rank and organizational information is immediately understood by anyone who can read the signs. So the symbols associated with military chaplain insignia are a pretty big deal.

Though the Continental Congress established the military chaplaincy during the American Revolution, the first instance distinguishing the chaplain from other soldiers was in 1835, when army regulations required the color of a chaplain’s uniform to be black. The first official chaplain insignia actually dates from 1880 and it was a shepherd’s crook, symbolizing the role of the chaplain as a guide and spiritual guardian.

Approaching the turn of the century, the generic symbolism was changed. In 1898, the Latin Cross insignia replaced the shepherds’ crook. By 1918, the Navy followed suit, dropping the shepherd’s crook and replacing it with a cross for their insignia. In WWI, concerns were raised about accommodating Jewish chaplains, but rather than return to the universal symbol, the army opted instead for a tablet symbolizing the Ten Commandments. With modifications, this symbol remains for Jewish chaplains in all forces. 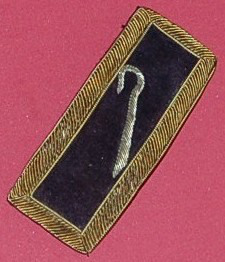 The inclusion of symbols for other religions has only occurred fairly recently. In 1990, the Armed Forces Chaplains Board adopted the dharma wheel, or prayer wheel as the symbol for Buddhist chaplains. In 1993, the crescent was adopted officially for Muslim chaplains. More recently, the Sanskrit syllable for the sound “OM,” designates a Hindu chaplain. 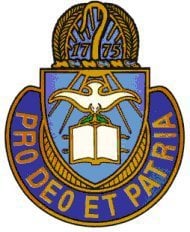 The original shepherd’s crook no longer is used to designate a US military chaplain, but it has been incorporated into the Chaplain Regimental Corps Crest. This insignia is composed of a number of symbols, with the crook and the date 1775 at the top symbolic of the early history of the Chaplain Corps. The universal concept of faith is deeply ingrained in the mission of the military chaplaincy, but sectarian designations have been the norm for nearly a century.