Church-a-Day and the Christmas Ornament

They are almost everywhere! I’m talking about images or references to churches, worship places, temples, or sacred  of all kinds. I’m beginning to see just how much we take these places for granted. Maybe it’s a place that we see so often we no longer think of its connection to faith or spirituality. Maybe it’s a common object or image that we never associate with a faith or a spiritual environment. My goal is to focus on one place, image, or reference to a church, temple, or spiritual object every day for 365 days. 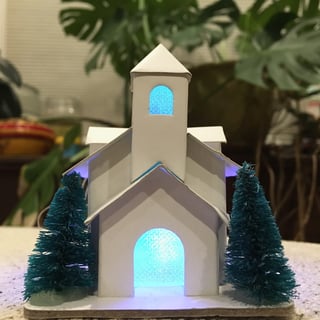 n. It sounds simple, but I hope the effort will expand an understanding of the spiritual in our culture and our everyday lives. I will share what I discover each day on my Sacred Space, Holy Place blog.

Church-a-Day is one of those ideas that came all at once, at a very specific time and place. On December 31, 2015, my wife and I added the last bag to the car packed and ready to go to the country, and then we checked the mailbox one last time. The delayed book my wife had been waiting for finally arrived, Noah Scalin’s 365: A Daily Creativity Journal. As we drove away, she opened the package and began reading out loud.

I directly credit Noah Scalin for the inspiration behind Church-a-Day. The book uses his project, a commitment to create a skull every day for an entire year, to explore ways to be creative. The author made skulls out of snow, video tape cassettes, stitchery, and all kinds of interesting, unconventional media. He describes how his creativity commitment became a life-changing journey and, of course, he shares lots of ideas and inspirations from other friends and artists who have taken on similar projects.

Somewhere after the first few pages, my wife and I began asking ourselves what we would do if we could commit to creatively exploring one idea every day for a whole year. My answer was obvious - a church! It may seem a silly quest, since Heimsath Architects works with churches of all kinds and every day I’m involved in some aspect of planning, designing, or building actual churches or related buildings. But I can already tell how important it will be for me to take a fresh look at images and buildings related to worship or the spiritual environment. So let’s get going….. 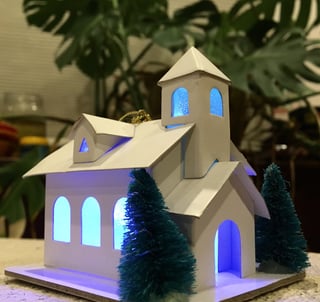 A Christmas ornament as a classic church. The pitch roof with end gables and a tower placed on axis on one end. This form needs no explanation to represent the prototype Christian worship building. This simple ornament is fabricated with paper. An LED light inside gives a range of colors to windows - a clear reference to the stained glass window associated with the prototype church.

This form is so ingrained in our psyche; I often forget that its origin is relatively modern. Popularity for this form can arguably be traced to a specific architect who was given an unprecedented opportunity to experiment with sacred architecture. Sir Christopher Wren, whose long career left an indelible mark on English architecture was an early student of the classics, and studied the writings of the Roman architect Vitruvius. After the great fire in 1666 destroyed two-thirds of the city, his commissions included the rebuilding of 52 London churches. Many of these compositions were based on a relationship between a classical proportion for the building and a more gothic proportion for one or more towers. But later classical compositions, notably the work of James Gibbs who designed the celebrated St. Martins-in-the-Fields (completed in1726) cemented the juxtaposition of the classical pediment with the soaring steeple as the prototype for heavenly architecture.