While researching outdoor shrines, I looked closer at Shinto shrines in nature and was delighted to see images straight from Hayao Miyazaki’s classic film, “My Neighbor Totoro.” I have fond memories of this film and remember the image of the shelter for a Jizo statue that the two young girls share in the rain.  Actually, as I discovered, the Jizo shrine is associated with Buddhism. But there’s plenty of Shinto beliefs in the film as well. 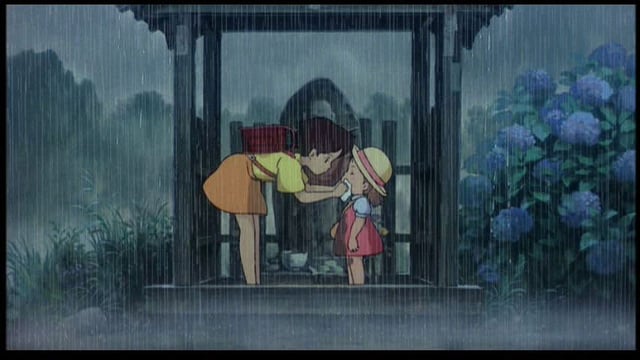 The director deliberately referenced traditional religious imagery to reinforce his ideas of the benevolent relationship between humans and nature. A surprising number of academic papers have examined this film and its religious connections. One that I found particularly accessible is titled, “The Power of Religion in Anime, Hayao Miyazaki’s Methods of Persuasion in My Neighbor Totoro.” a 2014 thesis by Yuxin Jiang, for the Haverford College Religion Department. Jiang organizes the stages of religious exposition in the film while offering a basic overview of both Buddhist and Shinto beliefs in Japanese culture.

Jiang notes that Miyazaki isn’t pushing one or the other tradition; the director uses both to develop his own deep concept of the relationship between the human and natural worlds. Consequently, the Miyazaki includes lovingly rendered images familiar to anyone aware of Japanese religions and their symbols. The most obvious, in addition to the Jizo shrine, are the Tori gates and the Camphor tree. But Totoro himself, Jiang argues, is clearly a Kami, or Shinto spirit. Totoro’s appeal, perhaps, is the artistic way Miyazaki expands on the spiritual relationship. He include traditions but then goes beyond them with a magical story about a friendship between children and the lovable Totoro.