In Washington DC, earlier this month, I came across this installation. The painted car hood is very deliberately propped up against the fence on this stretch of 16th St, NW. This is just north of the bridge that spans the Piney Branch Parkway and just south of the intersection with Arkansas Ave. Even with a bit of sleuthing on the internet, and I still don’t know whether this is a memorial or someone’s street art. 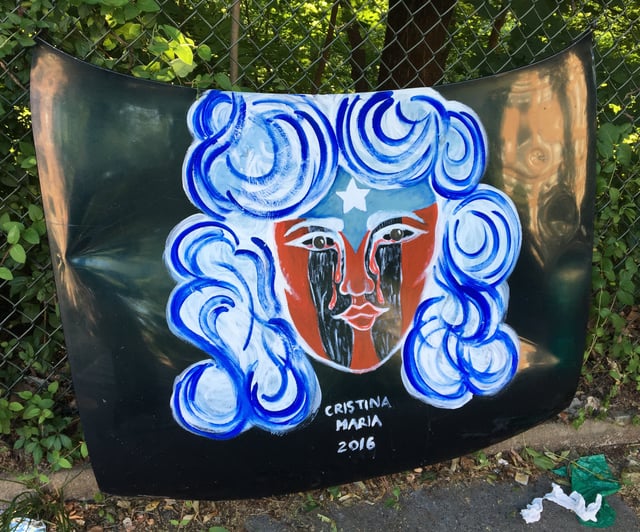 If it is a memorial, I would assume that Cristina Maria was killed in a car wreck. Though the thought is pretty morbid, perhaps the painting is on the hood of the very car in which she died. The year, 2016 would suggest the event is very recent. A break in the fence nearby may be the location of just such an accident. Except there doesn’t appear to be any news of such event, or at least not readily available. 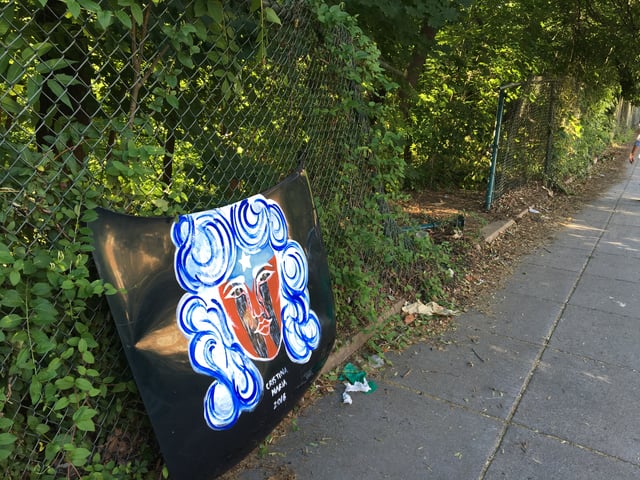 The other possibility is that an artist, wanting to attract some interest, painted this portrait on the hood of a junked car, dated it, and propped it up in a place where it might get noticed. And visitors like me would have to speculate and imaging just who this Cristina Maria might be, an accident victim, or perhaps the portrait conveys another message.

The face has the Puerto Rican Flag superimposed over it. The tears are blood red. This being Washington DC, perhaps this is a political statement.   There is a terrible economic crisis in Puerto Rico right now that Congress has been very slow to address, though yesterday, President Obama did sign a bill that provides temporary relief to the island.

Whatever this is, it was worth taking a look and worth photographing.