There are hints that point to the history. The classical building on 14th and Irving Street NW has the look of a stately public building, most likely a church. This church, in fact, boasted a US President as a member one hundred years ago. But that didn’t save it and now a cornerstone offers a clue to the past: 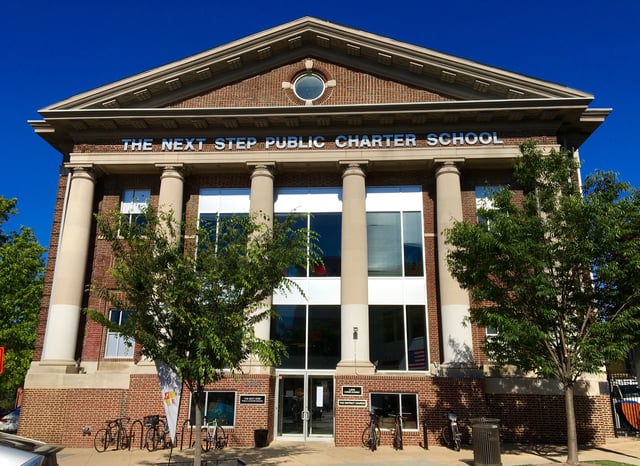 With some research on line, there’s an additional date that could be added: “Church disbanded sometime before between 1959 and 2004.” It’s not clear when the church folded, nor how long the building stayed empty. A young institution, Capital City Public Charter School, had grown quickly in its first four years and in 2004 moved in to the newly renovated church. Capital City didn’t stop growing. They expanded to capacity and started more grades at an off site location. By 2012, they moved out and relocated to consolidate their programs onto one site.

The reuse of Central Presbyterian continued with the another institution, The Next Step Public Charter School. The school focuses on at risk high school students who need a flexible curriculum to succeed. According to the school’s website, it moved from a previous location at the Latin American Youth Center. Their first semester in the old Central Presbyterian was in August 2012.  Here's their promotional video with several images of the renovated interior classrooms.

A DC history website, Quondam Washington, offers a brief history of Central Presbyterian which they say was discovered in the pages of a book in a used book store. This rescued history expands on the key dates and discusses the church events before they buildt on Irving Street. The new sanctuary was dedicated May 31, 1914.

President Woodrow Wilson joined the congregation in 1913, the first Sunday after his inauguration. The Church celebrated his Centennial Memorial in 1956 and named the education building in his honor. That plaque is still visible on Irving Street, but a fence post has been placed so insensitively that it covers a portion of the text.

The last entries note that the congregation considered moving from the 14th and Irving Street location, but the congregation voted to stay in 1958. They called an associate minster in 1959.  Some time after those dates, the Central Presbyterian Church ceased to exist.