Architects say they can “read” a building, which means the design is conveying information about the designers’ intent and possibly their aspirations. Sometimes, more information is conveyed than the designers may have intended. Last summer, I saw a major construction site that suggested a very sad story. Right next to a new mega hospital complex for the University of Montreal, a traditional church steeple was also under construction. I asked one of the construction workers whether this stone edifice was undergoing some kind of preservation work. “No,” he said, “that’s all new construction, we’re building a brand new steeple.” 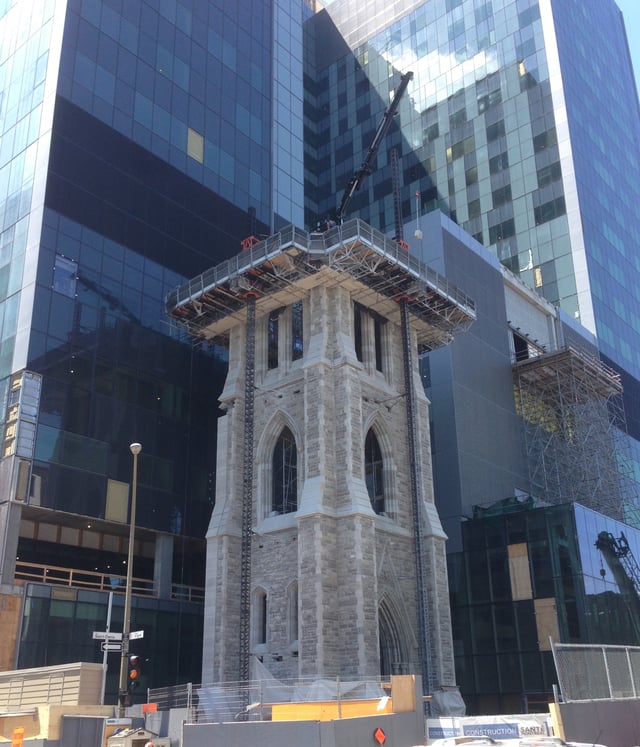 I thought at the time that the placement of the steeple was very odd. Since the hospital construction was so tall and so dominant, it completely dwarfed the poor steeple. The two construction sites were so unrelated that it really looked like someone had mistakenly started building the church steeple on the wrong site!

With a bit of research, the real story emerged. The new stone steeple was a consolation gesture to preservation advocates who tried in vain to save the Church of Saint-Sauveur. Local blogger Christopher DeWolf notes the church was built in 1852 for an Anglican congregation and was known as Holy Trinity. In the 1920’s a fire destroyed the old steeple and the church was sold a congregation serving Syrian Catholics. It remained the Church of Saint-Sauveur until it was abandoned several years ago.

The new central hospital is billed as the largest health complex in North America. The consolidation of three institutions, the project had been in the planning stages for decades. The architects were rightly proud of their work with the immense program, organizing the construction of over 3 million square feet with towers up to 21 stories tall. But somewhere in all that hospital program there also happened to be an old church. Rather than reuse some or all of the historic structure, the decision was made to tear it down. The architects then rebuilt the original steeple, not for any particular program need, but just because enough people in Montreal said it was important. 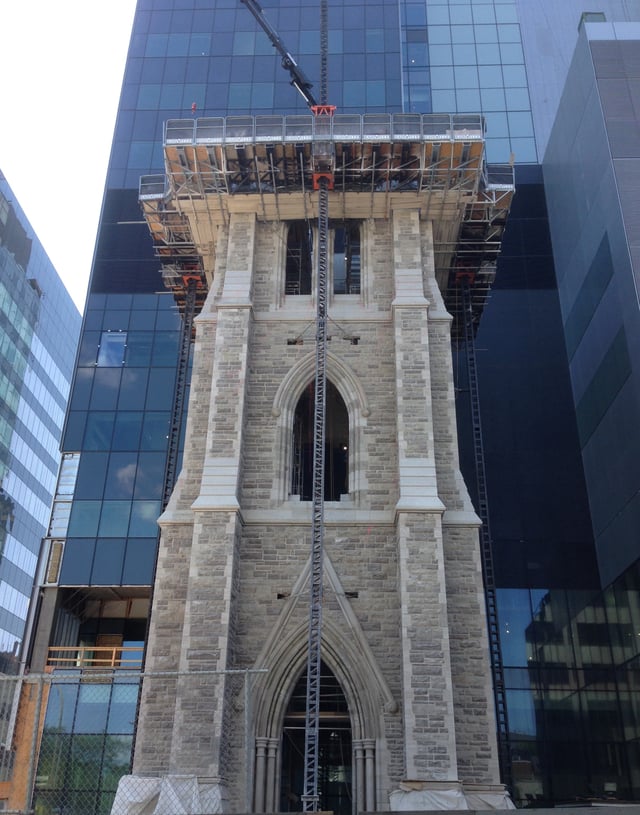 The materials, the size, the function of the recreated steeple have absolutely nothing to do with the hospital design. A good way to see how little regard the architects had for the old church is to imagine the 21-story hospital design without it. If you removed the steeple, the corner of the hospital would look exactly like the other corners, the steeple would never be missed. So this building tells the designer’s story loud and clear. “We were forced to keep a remnant of the old historic church, so we left a little room and stuck this steeple on the corner.” 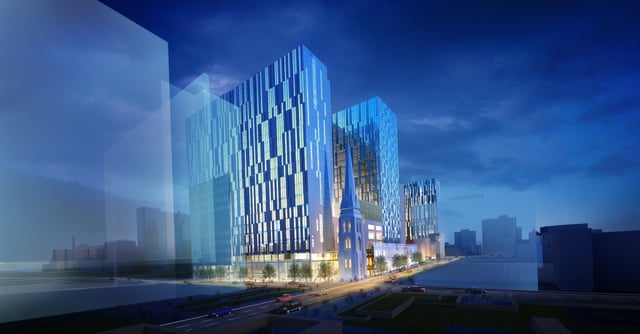