An exhibit just wrapped up inspired by Austin’s new system of electing council members. Sponsored by Artplace, and billed as an experiential and immersive exhibition, 10 artists were asked to produce place specific art projects each assigned to one of the 10 new geographic districts. The final projects were brought together in a downtown exhibit space for one combined showing. Los Outsiders, the artists assigned to District 1 in East Austin, focused on mementos from residents and images that defined their sense of the community. The work consisted of a collage of photographs with a video of a transit ride in the District projected on the assemblage. 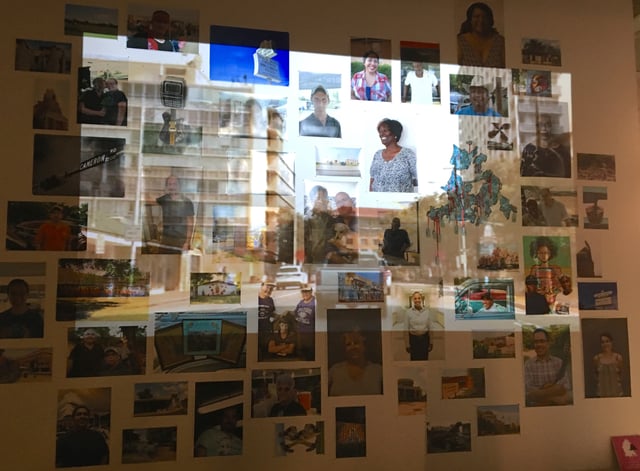 Taking a close look at the pictures, I was struck by the large percentage that included some aspect or image of a worship place. Some of the obvious iconic structures were there; the David Chapel Baptist Church, and Our Lady of Guadalupe’s steeple. Even the crossed signs of True Hope Church that I blogged about were among the images. But small snippets of religious themed art or imagery were included in many of the portraits. With historic connections to both the African American and Mexican American communities, it wasn’t a big surprise that a portrait of our neighborhood would so prominently feature images and places of faith.