We’ve participated in several projects that have envisioned different faiths using the same space for prayer and worship. This is not an easy challenge. The idea of a multi-faith chapel is not new, though the most common examples in America tend to be non-denominational prayer chapels or prayer spaces in hospitals or airports. The idea has renewed interest, in part due to a growing embrace of faith pluralism, and the practical limits of smaller faith communities and tighter budgets. The Brandeis University Chapel program is a Mid Century example of just how fraught this endeavor can be.

Celebrated architect Eero Saarinen was at the height of his career when he developed the master plan for Brandeis, a major university founded in 1948 as a non-sectarian Jewish institution. Included in the master plan was a concept of a multi-faith chapel. Saarinen’s plan showed one flexible worship space that was to be shared by three major faiths, Jewish, Catholic, and Protestant. 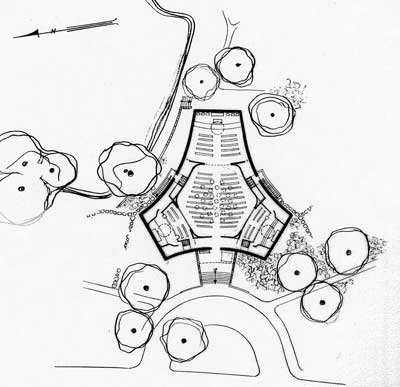 Though the concept was strongly embraced by students, significant impediments came from donors and faith leaders. The ideas of building a place where all traditions, or at least the Big Three, could all share the same space was just too radical. The University’s history notes that a few years later, a major donor offered to fund a Jewish Chapel, disregarding the master plan. Another account suggests the Catholic Diocese balked at sharing a space for worship. Rather than dwell on the rejected scheme, the Brandies founders took a new approach and developed the concept of a precinct with three related chapels, one for each faith.

Architect Max Abramowitz had designed several other buildings for the Brandeis campus. He was commissioned to design all three chapels around a reflecting pool, each with its own character and function. Fundraising activities were focused within each faith community. The Jewish Chapel was named the Berlin Chapel after its major donor. Cardinal Cushing led the Catholic development efforts and suggested the space be christened Bethlehem Chapel for Christ’s birthplace. The Protestant Chapel was named after Supreme Court Justice John Marshall Harlan. His grandson, Justice Harlan II was at the time also serving on the Court. His family chaired the fundraising effort to honor the elder family member. 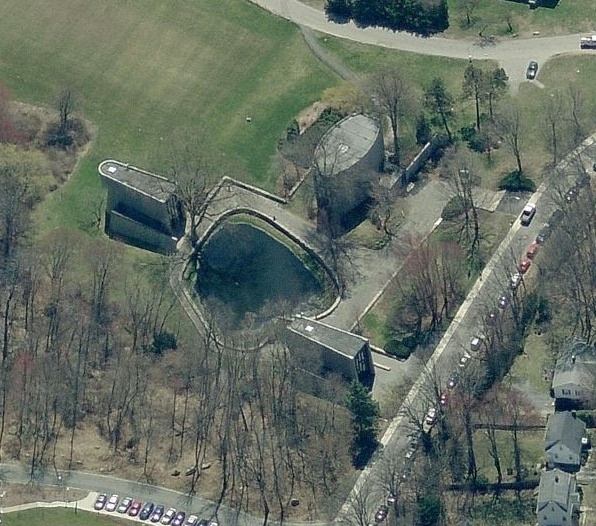 Though planned separately, the three chapels were dedicated simultaneously on Sunday, October 30th, 1955. The prestigious ceremony was attended by dignitaries of all three faiths. National publications featured the event and praised the innovative architecture and the shared chapel concept. The Three Chapels design was recognized in 1956 with a Merit Award by the American Institute of Architects. To this day, however, the faiths at Brandeis are architecturally close, but still segregated.