Final Resting Place in the Middle of a Road

In small towns in Texas, it is not that unusual to find a tree in the middle of the road. A two-lane street abruptly parts - the lanes are separated to respect the presence of a significant tree. These lone holdouts are delightful evidence of a past conflict between a developer’s grid and a living tree were the tree won. In Hearne, Texas, the hold out tree is only a small reminder of a much bigger conflict. And the winner in this standoff was a deceased former slave.

Thanks to Colley Hodges’ recent article for the OffCitewebpage, the story of Hollie Tatnell is passes on. Hollie Tatnell was born into slavery in 1859. When she died in 1911, she was one of the last to be buried in Hearn’s Old Colored Cemetery, which closed the next year. The Texas Historical Commission has a marker at Riverside Cemetery, originally known as the New Colored Cemetery, and which dates its first interment from 1896. By 1947, when developers purchased much of the land surrounding the old cemetery, they forced families to move the graves of their loved ones, conceivably to the other cemetery location.

But one family refused. The children of Hollie Tatnell defied the pressure to exodus the property and insisted their mother’s final resting place be respected. And so the grave wound up in the middle of the road. Whether the oak tree went with the grave or came later is unclear. But drive through Hearne today and a tree, a Texas Historical Commission marker, and a lone gravesite forces the lanes of traffic to part. The gravesite is marked and a second plaque has an etched image of a gate with the words, “Come Ye Blessed.” 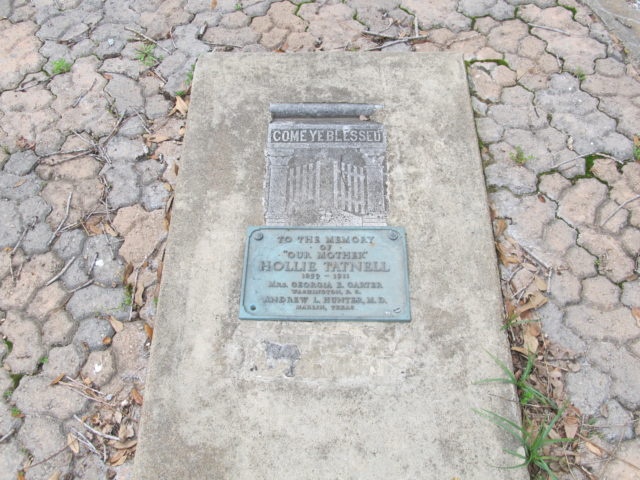 The historic marker, placed in 2007, shares the story of Hollie Tatnell and the fight to keep her gravesite intact. It also shares the significance of this lone holdout. "This single grave," it reads, "serves as a reminder of the area's early African-American community and of the sanctity of burial grounds." I couldn’t find the exact address, but my next trip to Hearne, I’m determined to find it.