You would think that an island with permanent settlement dating from the 1770’s would have an old church or some ancient place for worship dating back to the earliest days. According to A History of Little Cranberry Island, Maine, by historian Hugh Dwelley, prior to the first European settlements, native peoples, mostly of the Penobscot and Passamaquoddy tribes came to the island seasonally to take advantage of clams, fish, deer and seal that were plentiful in the summer months. One burial site was discovered in the 1960’s but otherwise, there appears to be no evidence of a sacred site from the native people visiting the island. From the first century of European settlement, several families from Little Cranberry Island were registered members of congregations off the island. However, it wasn’t until the 1890’s that this island finally had an established place of worship. 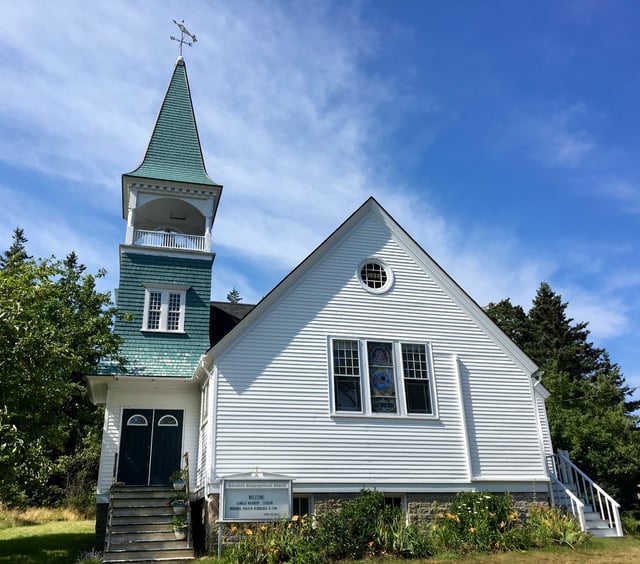 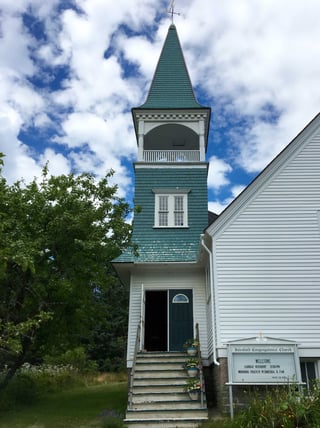 When the island residents finally got focused on building a church, they really went for it! An influx of summer residents and visitors to a major tourist hotel brought new energy to the island. The settlement near the harbor became known as the town of Islesford. A growing Congregational ministry began worshipping at the local Islesford School. By 1898, the congregation became known as the Islesford Congregational Society and the cornerstone for a new church was laid on December 10 of that year. There’s no information on the dedication of the new sanctuary, but one assumes it was ready for the summer residents the next year. The date on the round church’s round window is 1898, indicating either the official formation of the congregation, or the start of construction, or both.

The church today appears to be largely unchanged since its construction. The building exhibits the distinctive details and materials of shingle style architecture which was very popular at the time. The interior wood structure is exposed and remains unpainted. The lack of interior finish or even insulation would have suited larger summer gatherings. I described the church and its surroundings in my blogpost after an earlier visit in 2011.

I briefly met the new pastor who serves this church and the congregation on Greater Cranberry Island. The town website has an appeal for donations to make repairs and to restore the structure. Now into its second century, it will be interesting to learn more about the church in the coming years and its continuing ministry for both permanent and seasonal members.