Off a busy intersection in the heart of suburban Long Island, a small park has been carved out as a unique place of memory and contemplation. The 9/11 Responders Remembered Park has been privately funded, but has the support of a local community with many ties to those who came to help in the midst of crisis. In the days, weeks, and months after the World Trade Center Towers fell, these first responders, construction workers, and many volunteers provided their services to rescue, recover, and remove at the devastated site in downtown Manhattan. And tragically, many have paid the ultimate price for their service. 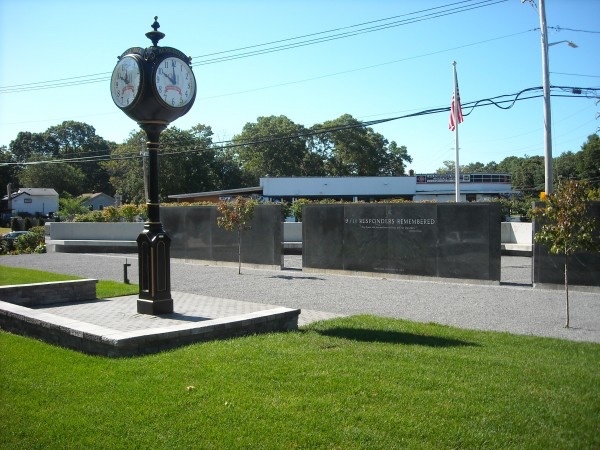 Within a short time, many in this group were stricken with a host of ailments linked to the toxins they were exposed to on the World Trade Center site. In response, an organization was formed in 2009 by small-business owners, union members, community leaders, local elected officials, surviving 9/11 responders, and the widows, parents, children, and siblings of deceased responders. The First Responders Remembered group soon focused on common place for remembering these unsung heroes. And so the First Responders Remembered Park was dedicated on Sept 10, 2011.

Here’s a wonderful clip from May 23 honoring the updated fallen with one of the organization’s leaders, John Feal and comedian Jon Stewart who both have worked tirelessly to promote the needs of the stricken 9/11 first responders.

The one acre park features a broad promenade, an ornamental park, long benches and three large walls with the names of those first responders who died on 9/11 and those who continue to succumb due to injuries or illnesses suffered as they provided their service. The list currently approaches 900. The First Responders Remembered Facebook page adds regularly to the list as new deaths are identified. The organization holds ceremonies twice a year to read the names of the fallen, and to add new names to the wall.